I’VE been channeling my 16-year-old self for my calligraphy class project this term.

When we were given the theme of water, I was transported back to Mr Wincop’s art class circa 1998, when I was introduced to the work of Japanese artist Hokusai (1760-1849). 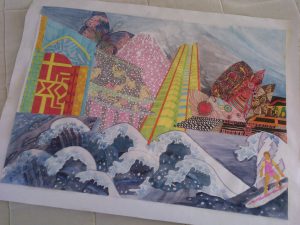 Part of our GCSE art coursework was to create a street scene using famous buildings from around the world – and I needed a wave for my Aussie surfer outside the Sydney Opera House.

The Great Wave off Kanagawa – the most famous of Hokusai’s Thirty Six Images of Mount Fiji series of landscape prints – fitted the bill perfectly.

When I discovered there was a poem inspired by the image – Der Berg (The Mountain) by German poet Rainer Maria Rilke – it also proved the perfect fit for my present studies.

After months of focusing on the waves on the fourth floor of A Block all those years ago, it took me a while to spot the mountain of which Rilke spoke in the print. 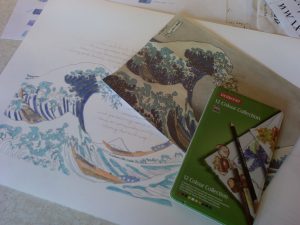 The Great Wave off Kanagawa depicts three boats being threatened by a large wave, while Mount Fiji rises in the background.

Mount Fiji is a popular subject for Japanese art due to its cultural and religious significance.

As I researched the image and the series from which it came, the poem itself started to make more sense, such as the “six and thirty times and hundred times the painter tried to capture the mountain”.

Hokusai created 36 images of Mount Fiji, all from different locations and in various seasons and weather conditions, but he probably tried 100 times to get them right.

I can certainly identify with the frustration of the artist as he “tore it up then pushed on again”! 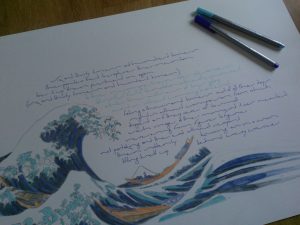 Each of the prints was made through a process whereby an image drawn on paper was used to guide the cutting of a wood block, which was then covered in ink and applied to paper.

It is thought around 5,000 copies of The Great Wave off Kanagawa were made before the woodblock started to show significant wear.

Mr Wincop introduced me to many artists that I still love now, as well as calligraphy.

Susan Moor, who teaches the calligraphy class I attend, came across him several times, but she believes he passed away some years ago, which was sad to hear.

I’d like to think he’d be pleased to know that what he taught me in that art class almost 20 years ago continues to inspire me to this day.