Bullet journaling should be right up my street!

I carry a diary and a selection of notebooks around with me and a bullet journal brings their contents together in a beautiful analogue bundle.

I hadn’t heard of a bullet journal until artist Gail Armstrong introduced me to hers when she attended one of my calligraphy courses for the Cultural Spring last year. 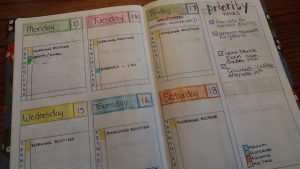 I didn’t see the attraction at first, but I’ve seen an increasing amount of chatter about bullet journaling on social media lately.

So I decided to investigate further and joined the Facebook group – Journaling North East – that Gail runs for other enthusiasts in the region.

They hold regular meet-ups and I was finally able to make one this week.

Gail explained how she discovered bullet journaling 18 months ago, when she gave up her job and went into creative coaching. She now combines her art and coaching via Start With A Doodle.

“I’m a very tactile person and I love writing, so it was perfect for me,” she said.

I was delighted to find myself in the company of other stationery touchers and their wonderful notebooks, to see how they had been transformed into bullet journals. 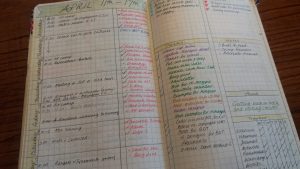 There are no hard and fast rules to bullet journaling, as each one is tailored to suit the person using it, but there are some common elements.

It was recommended that I start with a contents page and then set up monthly pages and daily pages, which act as the diary part of the bullet journal.

That’s my challenge for the next month! (Everyone is given a task to complete before the next meeting, to introduce a bit of accountability.)

The theme of this month’s meet-up was collections, or lists – and I’m definitely a list maker!

Each person showed examples of their collections/lists, which included an episode tracker for TV box sets and a colour chart for a set of pencils one journaler was collecting. 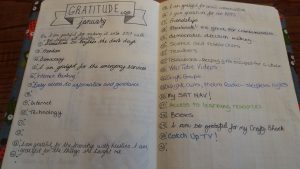 The official Bullet Journal (or BuJo for short) was created by Ryder Carroll, a digital product designer living in Brooklyn, New York.

The official website describes the method as “rapid logging” with bullet points and symbols.

But the concept has found a home among creatives, many of whom have turned their pages into works of art.

The pressure’s on, especially with Gail appealing to me to incorporate some calligraphy.

I’ll certainly be attempting to make my pages look pretty and I’m sure there’ll be a few practice runs before I find a system that I’m happy with.

The perfectionist/borderline OCD side of me will just have to learn to live with that, although I’m told washi tape covers a multitude of sins!

I’m going to aim to start my bullet journaling in earnest in April.

I did have a notebook I’d received as a Secret Santa gift in mind for the job, but I think I’m going to invest in a dot-grid Leuchtturm 1917 after seeing them in use at the meeting.

I may also need some new pens. Any excuse for new stationery!