I LOVE finding calligraphy in unusual places. And there are few places more unusual than the side of an old school science block in the middle of a housing estate. 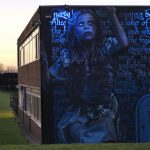 A giant glow-in-the-dark image, based on the Lewis Carroll Book Alice’s Adventures in Wonderland, now adorns the side of the building at Chuter Ede Community Centre in South Shields.

The work was created by artist Frank Styles, whose work has caught my eye before, and his partner “Irony”, as part of the Street Art Heroes project for Cultural Spring, a programme promoting the arts in 10 wards in South Tyneside and Sunderland.

It references Carroll’s frequent trips to South Tyneside – he reportedly wrote the opening lines of Jabberwocky and The Walrus and the Carpenter while visiting his cousin in Whitburn – and the street in Biddick Hall named after him, Carroll Walk. 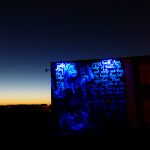 In a world first, UV paint is illuminated at night, bringing up the detailed portrait of Alice by Irony and the calligraffiti by Styles. The text around her is a letter about a missing part of the story, cut out of the book because the illustrator didn’t want to draw it.

Styles said: “Irony had created a few indoor works of art using UV paint, but this is the first time one like this has been made outside.

“Normal paint is used, and then afterwards the UV paint is applied to certain areas to make them stand out more.

“It’s a very striking piece, and it’s a shame that it’s not in a more prominent place, so it could be seen by more people. Hopefully, once people realise it’s there, they will go along to enjoy it.”

I, for one, will certainly be taking a closer look.

In the meantime, you find out more about Frank Styles here and the Cultural Spring here.