The Creative Space is a pop-up shop opened by the Cultural Spring in the Bridges shopping centre in Sunderland.

As well as showcasing the work of the Cultural Spring over the last three years, it will act as a venue for a range of free arts workshops, film screenings and live performances. 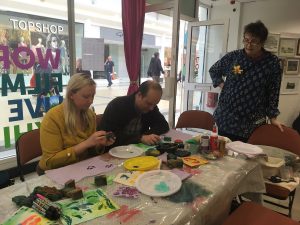 A fabric workshop at The Creative Space.

It will also be highlighting the city’s bid to become City of Culture in 2021.

Visitors are being asked to contribute their thoughts and ideas on arts and culture in Sunderland and South Tyneside and what they would like to see happen or change in their area.

The Cultural Spring is funded by the Arts Council England and was set up to get more people in Sunderland and South Tyneside to experience and be inspired by the arts and culture.

It worked in 10 wards – five in Sunderland and five in South Tyneside – to put a range of workshops on the doorsteps of people who traditionally wouldn’t access the arts.

For more about the first three years, read my previous blog here.

For the last year of the three-year project, I ran calligraphy workshops at Whiteleas Community Centre in South Shields and the group is now running under its own steam after the first phase of the project came to an end. 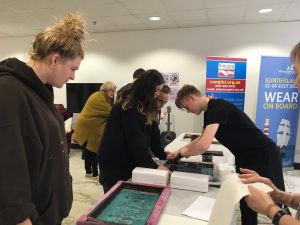 A screen printing workshop at The Creative Space.

The Cultural Spring has secured funding for a further three years and is moving into 10 new areas – Hendon, Millfield, Pallion, Sandhill and St Anne’s in Sunderland and Horsley Hill, Beacon and Bents, Simonside and Rekendyke, Monkton and Bede in South Tyneside.

I’ll be running a free calligraphy taster session at The Creative Space on Thursday, April 28, from noon until 2pm, on a drop-in basis.

Some of the work created by my group from Whiteleas Community Centre is also on display as part of the exhibition highlighting the success of the first three years of the Cultural Spring.

The Creative Space is open seven days a week until Thursday, May 4. For a full list of events, click here.