When you’re searching the internet for images of Pyrex bottles in the middle of the night, you know you’ve got an idea you need to get down on paper!

I’ve been quite brave and entered an art competition for the first time since primary school. 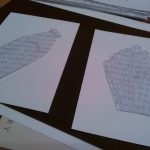 I heard about the Alice in Sunderland Design Competition online and an idea immediately sprang to mind, involving calligraphy, naturally.

Having just done an Alice in Wonderland-themed commission, my imagination was still focused on the words ‘eat me’ and ‘drink me’ – and cupcakes and bottles.

The ‘drink me’/bottle theme was the one that had me hunting for Pyrex, so I could include a nod to Sunderland’s glass making heritage in my piece. 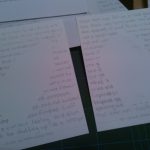 Established in America in 1908, Pyrex reached the UK in 1922 thanks to James A Jobling, of the Wear Flint Glass Works in Sunderland.

For ‘eat me’/cupcakes, I just had to think about my friend’s cupcake business!

My aim was to write the relevant passages from the Lewis Carroll book to form the shape of a bottle on one piece of paper and a cupcake on another. 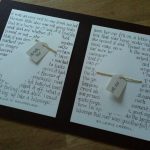 The Roman small letter was perfect for the Alice in Wonderland-themed proposal I was asked to do the calligraphy for, so I stuck with it for my competition entry.

I’m not expecting to win, but it would be amazing to be part of the exhibition.

There are many connections between Alice in Wonderland and Lewis Carroll and the north east of England, and the exhibition and competition are part of a series of events celebrating that connection and the 150th anniversary of the book’s publication.