My calligraphy workshops are done and dusted for another year.

The last few weeks have been all about Christmas-themed lettering and I’ve been fortunate to work in some excellent venues – and fill them!

In November I returned to The Customs House in South Shields and Gateshead Central Library, taking over the gallery spaces in both venues.

I also held my first workshop at Delight & Wisdom in Corbridge and Middleton Lodge Estate, near Richmond in North Yorkshire – a definite highlight of the year for me.

And The Art Room Sunderland looks set to become another regular venue – a late addition to the schedule after my other workshops sold out.

Middleton Lodge – a Georgian country estate – is a truly stunning place and the warm and cosy surroundings of The Old Forge Barn gave off a very hygge vibe. 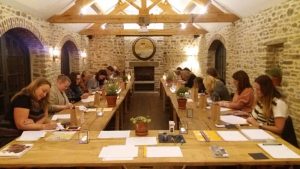 The workshop sold out before I even had chance to put it on my website, so I had a great feeling about it from the start.

It’s the furthest I’ve travelled for a workshop, yet still only 40 minutes from home via the A1.

But it was so worth it, as I led a group of 11 friendly and enthusiastic staff and then 22 members of the public through some copperplate script – making it the largest group I’ve ever taught.

I really didn’t want to leave, but fortunately I’m heading back in January for a wedding-themed workshop – so watch this space! 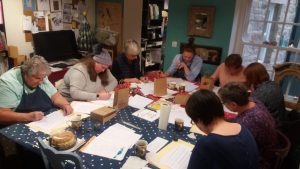 I got chatting to store owner Kerry Steele at the Imogen Owen: Modern Calligraphy Workshop author event in Corbridge earlier in the year.

Seven months later, we managed to squeeze eight people into the workshop space at the back of her shop for an introduction to writing with a pointed pen.

And three hours wasn’t enough for them, so again, I’m heading back to spend more time with the group in the new year!

From modern to traditional 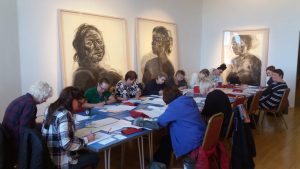 Workshop at The Customs House.

The workshops at The Customs House, Gateshead Central library and The Art Room Sunderland had a traditional calligraphy spin, with uncial script the focus – perfect for a rustic Christmas celebration and with just 26 letters, great for beginners.

I’m booked in for another session at The Customs House in February and I’m hoping to be part of the next Gateshead Live programme too. 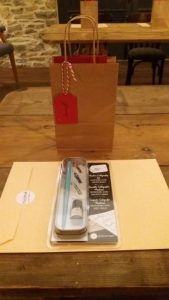 My Christmas workshop attendees were given an extra special present on top of their usual calligraphy kit.

They were very well received and a great addition to the workshops.

The pens were once again from Manuscript Pen Company – a beginner’s kit with three nibs for the broad-edge pen styles and their new Modern Calligraphy set.

The latter has been curated by Joyce Lee from Artsynibs and includes a straight holder, three pointed nibs, a bottle of ink and storage tin.

It was a perfect introductory kit for those trying a pointed pen for the first time.