The Calligraphy and Lettering Arts Society (CLAS) is bringing its 25th anniversary exhibition to the University of Sunderland. 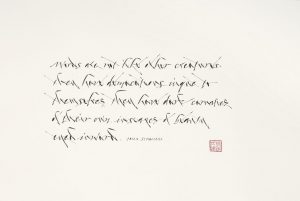 A Way With Words features almost 100 pieces of work showcasing the best of contemporary calligraphy and lettering arts.

It has been curated by world-renowned calligraphy, Dr Manny Ling, who is also programme leader for MA Design at the University of Sunderland.

Two of his pieces will be shown alongside a range of other works by 56 calligraphers from around the world, representing the diverse and international range of CLAS members’ work.

From traditional to modern

Traditional manuscripts with illumination and gilding will be on display alongside many other techniques, such as writing on metals or glass, work with nibs, brushes and other tools, paints, inks and engraving, linocuts and digitally manipulated images. 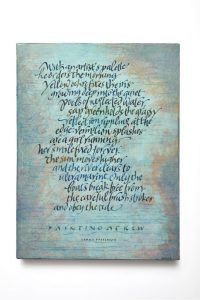 One of the largest western lettering societies in the world, UK-based CLAS has an extensive membership and is a registered charity that provides educational support for its members and the wider public.

Manny, who is an Honorary Fellow of CLAS, said: “The opportunity to curate this exciting exhibition has been a huge honour; showing the many ways to express words both visually and beautifully.

“In an increasingly visual society, calligraphy has gained a popularity as people appreciate the skilful demonstration of scripts and styles.

“It is also a thriving and popular craft skill that encourages anyone with a love of words to express themselves.

“We anticipate this will be a hugely popular exhibition.”

Creating a centre for calligraphy development

Manny has made it his mission over the last 19 years to create a hub for the traditional letter-making skills of calligraphy on Wearside, establishing the International Research Centre for Calligraphy (IRCC) at Sunderland.

He has also launched a popular graphic design course in his native Hong Kong.

Manny believes Sunderland has now firmly established itself as an international centre for calligraphy.

He said: “We developed the IRCC at the university and since 1999 we have been hosting regular international calligraphy conferences, attracting calligraphers and academics from across the world, coming to Sunderland for master classes, as well as lectures and seminars to discuss the serious issues surrounding the art.

“As a result of our efforts, Sunderland is now perceived globally as the centre for calligraphy development.”

Learning from the past

Manny believes it’s no coincidence that the city and university have become such a calligraphy hotspot.

“You only have to look back at Sunderland’s history at St Peter’s and the writings of the monastic scholar Venerable Bede, who studied calligraphy as a boy, to realise how connected this area is to this art form,” he explained. 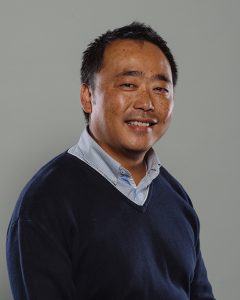 Manny has forged his own successful career out of calligraphy, combining his knowledge and interest in Eastern philosophy with Western design and typographic practice to develop a distinctive approach to the subject.

He has been invited to speak and show his work internationally and completed a PhD in 2008 – the first practice-based Doctorate in the world to be awarded for Western calligraphy.

He said: “Since I was 16 I have always wanted to promote calligraphy in a more formal and academic way to a broad audience.

“I want people to see calligraphy as more than just a hobby. It’s an art form in itself and something you can study for the whole of your life.”

A Way With Words will be on display in the Priestman Gallery, First Floor, Priestman Building, City Campus, Green Terrace, Sunderland, from March 7 to April 2, 2019.

The gallery is open from 10am to 5pm, Monday to Friday. Admission is free.

Most works are also for sale and commissions are welcomed.