Crafting has kept my kids busy for most of the summer holidays.

I planned the six weeks holiday around activities happening in venues across the north east. (In a pretty notebook with a fountain pen, obviously!)

Some were our favourite school holiday haunts, like West Boldon Lodge in South Tyneside, while others we were visiting for the first time. 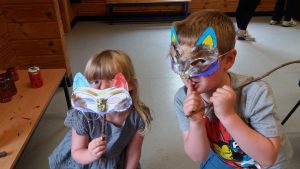 We visited West Boldon Lodge, an environmental education centre, twice, booking up for both the Roald Dahl and Alice in Wonderland themed events.

What I like most about the place is the fantastic use of its indoor and outdoor space. When they hold such events, the theme really does take over the whole place.

There are always several crafting activities going on inside the log cabin on the site, with more in the woodland around it, including some sort of trail.

This time around, we made dream catchers (BFG), hunted for bugs (James and the Giant Peach), played croquet (minus the flamingos) and attended the Mad Hatter’s tea party. 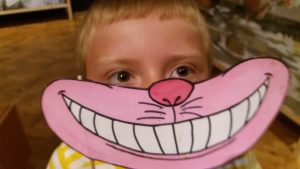 There was more Alice-inspired crafting at the Laing Art Gallery in Newcastle.

After making some art straw and paper flowers, we headed upstairs to take in the British Library exhibition, Alice in Wonderland.

I attended the opening night as part of The Late Shows, but it was great to go with the kids, who are big fans of the Disney film.

We took part in our first Mini Maker Mondays session at the Customs House in South Shields and made swans inspired by the town’s South Marine Park.

South Shields Museum and Art Gallery had lots on over the summer, but we chose to attend the Pirate Day and made hats, parrots and eye patches.

I was desperate to see the Shoes: Pleasure and Pain exhibition at the Bowes Museum in Barnard Castle, so I sought out the days they had child-friendly crafting activities on. 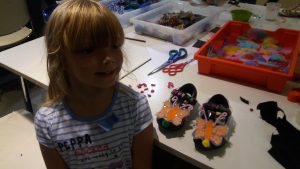 James and Sophie quite happily decorated their old school shoes with tissue paper, sequins and shells, before heading upstairs to see how real designers do it.

We got the best of both worlds – fun for the kids and for me – although the fact Cinderella’s glass slipper is in the exhibition held some sway as well.

My sister and I took the kids up to Woodhorn and as well as hunting Pokemon, we found out about the colliery’s worst pit disaster, which happened 100 years ago.

The children got to design their own disaster glass, traditionally used to commemorate the deaths of miners in the north east before the First World War.

Our last bit of crafting took place at Auckland Castle, which is closing at the end of the month for a major redevelopment project.

Having made it as far as the grounds on a previous visit, we actually went into the castle this time and completed the family trail and decorated some bird pictures.

The majority of places we went to were offering the activities for free, or for a very small charge or donation, which helped keep school holiday costs down.

We’re spoilt for choice for museums, galleries, libraries and other attractions in the north east and they’ve always got something going on for families.

We should never take them for granted.