Merry Christmas! I’ve had the pleasure of creating some lovely gifts this festive season and decided to share some of them with you. So snuggle up with a mulled wine and read on. 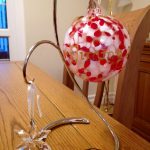 December was one of my busiest months last year and this year has been no different.

And just like last year, I found myself adding my calligraphy to a bauble from the National Glass Centre, bought by a woman in memory of her late husband.

I loved the decorative Swarovski hanger she chose to display it on at home.

And anyone who says north east blokes aren’t romantic, clearly haven’t come across the men who asked me to help them with some very special Christmas gifts.

One had found an old piece of prose and a poem that his wife had penned more than 40 years ago, and wanted to have them written out and framed. 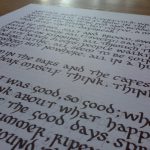 The bleakness of the prose lent itself perfectly to the uncial calligraphy style, while the poem, entitled Storm and Sea, was written in italic.

Another commission involved a wedding proposal – the second I’ve been involved in this year! (Read about the first one here.)

The man popping the question had bought a lovely book in which he wanted to add quotes about his intended – but his writing wasn’t quite up to scratch.

Newcastle Arts Centre (very kindly) put him in touch with me and I used the skills I picked up in this term’s calligraphy class to make his words look as beautiful as they sounded. 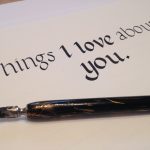 I penned one line per page in black foundational hand, using a dip pen and two different nib widths, so I could enlarge some of the more important words.

My calligraphy skills were also called upon by a family friend, who was creating a photo montage for his wife and wanted a quote about memories written on the mount.

Copperplate was the only option for something so decorative!

Another husband wanted a poem written for his wife – so there’s at least four men showing their romantic side in the north east!

I also created some items for my first Christmas Market at the North East Business and Innovation Centre in Sunderland, including cards and gift tags, which proved very popular.

I even had an order for three of my cards from Canada! (It was from my ex-pat best friend, but I’m still counting it as an overseas order!)

It just goes to show the versatility of calligraphy – and Creative Calligraphy offers a truly bespoke service that can cater to whatever people have in mind.