Creative Calligraphy did vintage at the weekend.

I was invited by the organisers of Newcastle Does Vintage to offer calligraphy workshops at the event on Saturday. 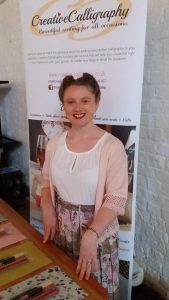 Keen to look the part, I invested in a vintage skirt from a charity shop.

I also had my hair pinned up 1940s-style on the day by Hepkat Kitten Vintage Hairstyling.

And I was conveniently placed next to make-up artist Kelly Vaughan for a bit of rouge!

My stand attracted a lot of interest and my workshops were fully booked.

I’ve had some lovely feedback from those who took part in the short introduction to foundational calligraphy.

I was very impressed with their lettering, particularly given the rather chilly venue – The Clayshed at Hoult’s Yard.

In between sessions, I had plenty of time to take in the stalls and the rest of the entertainment on offer. 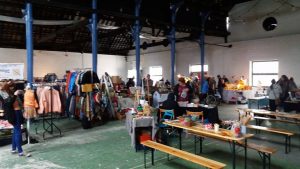 The pop-up tea room was the first stop for my friend and I, followed by lunch at The Pickled Porker.

(I can recommend the rosemary and sea salt fries).

I even picked up a pair of knitting needles for the first time since I was taught how to knit as a child, in a workshop run by Julie and the Knits.

I’m still struggling to grasp the way she casts on, but the stitches are coming back to me.

The stalls were decked out with so many unique and beautiful things, it was hard to stick to my budget!

I was tempted by a handbag, but it was a couple of Mabel Lucie Atwell prints from Redpath Collectables that came home with me. 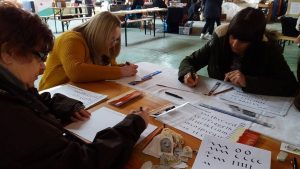 The best bit of the fair for me was seeing things that brought back so many memories.

My sister and I spent a lot of time raiding our nana’s wardrobe and make-up box as kids and her dresses would have gone down a storm on Saturday.

I also spotted boxes of Fuzzy Felt and a brown Smarties mug that I’m pretty sure came with an Easter egg one year.

Britain Does Vintage organises these events all over the country and they’re back in the north east on May 7 for Durham Does Vintage.

I’d suggest you go along if you too fancy a trip down memory lane.