I’M half-way through the Cultural Spring’s 10-week Challenge, so I thought I’d give a little update on how things are going so far.

The challenge is part of the national 64 Million Artists campaign to get everyone in Britain exploring their creative side through weekly artistic challenges.

It’s about having a go, not being an expert, which is probably just as well given some of my efforts! 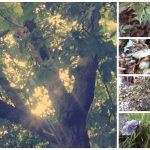 The first challenge was to collect signs of autumn, so the children and I pulled our boots on and headed to the park to collect leaves, seeds, pine cones and conkers.

I took plenty of photos, created a collage and duly uploaded it to the 64 Million Artists website.

The second challenge encouraged us to daydream.

I’ve blogged before about how little time I seem to have for just thinking sometimes, so this forced me to use my imagination a little. 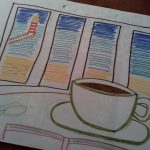 We had to draw a picture of exactly where we’d like to be “right now” and quite a few images came to mind, but they all seemed to feature a beach, so I sketched an image of a book and a cup of coffee resting on a table, looking out to sea.

Week 3 involved another photo collage, telling a story based on pictures from the last 12 months of your life.

Setting up Creative Calligraphy has been a big part of my life during that time, so I selected a few images from my first year in business. 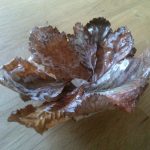 The leaves from Week 1 (and subsequent autumn walks) came in handy for the fourth challenge of making a sculpture, after I found instructions for a DIY autumn leaf bowl online. A few balloons and quite a bit of glue later, I had something that sort of resembled one!

For Week 5, we had to create a map of where we live, so I sketched out our beautiful seafront in South Shields and mine and the kids’ favourite haunts – the beach, the park, the fair and Minchella’s, all of which are on my weekly run route!

I’ve continued to upload each project and it’s been interesting to see what other people doing the challenge are coming up with, both in Sunderland and South Tyneside as part of the Cultural Spring 10-week challenge, and further afield as part of the broader 64 Million Artists campaign.