It was a pleasure to meet some of the other artists involved in the Cultural Spring in a get-together at the Customs House in South Shields.

I’m about to embark on the second block of workshops for the community engagement programme, which aims to improve access to the arts in disadvantaged areas. 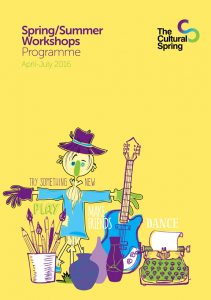 Director Emma Horsman and community engagement officer Michael Barrass were keen to hear our feedback and update us on the future of the project.

Emma explained that more artists were employed during the autumn/winter 2015 workshop programme, including myself, and the new workshops were really well received.

There were 227 participants in total, accounting for more than 2,000 different attendances at the 23 workshops on offer, including my calligraphy sessions.

Two thirds of people came from the local authority wards in Sunderland and South Tyneside being targeted by the Cultural Spring.

Others travelled from as far as County Durham to take part in the varied programme.

The spring/summer workshops programme has now been released and new workshops this time around include lino cutting and songwriting.

Textile artist Kath Price has been leading workshops since the Cultural Spring started in January 2014, in the traditional crafts of rag rugs, clippy/hooky mats and embroidery. 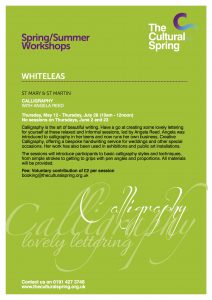 Her latest sessions are inspired by a recent trip to northern India, discovering rich new fabrics, embellishments and techniques.

Speaking of her involvement in the Cultural Spring, she said: “If you are an artist, you have to push yourself, you can’t be a fading lily, you have got to get out there.”

The Cultural Spring is due to come to an end in December, after three years.

Some groups are on the verge of becoming sustainable in their own right and moves are afoot to support them in that via the Community Foundation.

Emma said: “What we don’t want is for this project to come to an end and for these groups to just end.”

Meanwhile, a lot of work is going on behind the scenes to ensure the Cultural Spring doesn’t come to an end at all, with bosses bidding for further funding from the Arts Council.

Phase two would see 10 different wards being targeted, but with the same aim of widening participation in the arts in traditionally hard-to-reach areas.

Emma said: “We are hopeful that we will be successful and and if we put a really good bid in, they will not have a reason to turn us down.”

For more information about the Cultural Spring, visit the website here.