I’m thrilled to be embarking on another term of calligraphy workshops for The Cultural Spring.

The autumn programme officially kicks off the second phase of the Arts Council England-funded project to encourage engagement with the arts in Sunderland and South Tyneside. 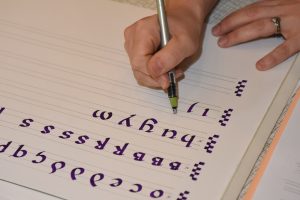 I was involved in the final year of the first phase of The Cultural Spring and the group I tutored at Whiteleas Community Centre in South Shields is still going strong.

I also ran several taster sessions over the summer, including at St Oswald’s Church in Grindon, Sunderland, where the photographs on this page were taken.

The project is now moving into 10 new council wards – five in Sunderland and five in South Tyneside – but I’ll once again be based in South Shields. 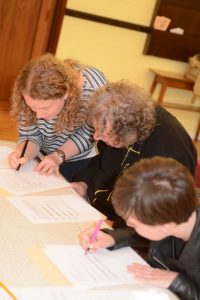 I’ll be running an eight-week course from 6pm to 8pm on Wednesday evenings, from September 20 until November 15 (excluding October 25), at The CustomSpace in Captain’s Row, Tyne Dock – a sister venue to The Customs House.

We’ll be working our way through the basics of calligraphy to form a simple calligraphy script, with participants given more time to hone their skills than they would do in a one-off workshop, which usual last just a few hours.

All materials will be provided and I’m looking forward to coming up with some sort of project for everyone to work towards so they have something to take away with them at the end of the eight weeks. Is November too early for a Christmas craft?

How else can you get involved?

If calligraphy isn’t your thing, then there are plenty of other activities to get involved with, including dance, drama, music, singing, creative writing, jewellery making, photography, sewing and textiles, screen printing, arts and crafts, upcycling and drawing. 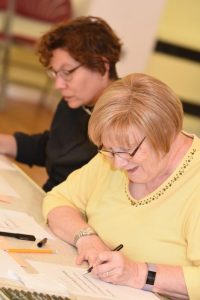 The full programme can be downloaded here, but if you’re into arts and crafts like me, here are a few highlights!

There are some fantastic family-friendly sessions in the programme too, including eco-crafts with Williby Roc’s at Bilton Community Trust Hall in Taunton Avenue, Low Simonside, Jarrow, on Saturday mornings, from 11am to noon, from October 14 to December 16.

The Chalk Construction Club, at Trinity House in Laygate, South Shields, is an eight-week programme that introduces families to engineering, architecture and science through science, technology, engineering, arts and maths (STEAM) based activities.

It’s suitable for children over the age of two and their grown-ups, but as it’s on Wednesdays between 10am and 11.30am, I’m assuming it’s aimed at pre-schoolers.

There also some great Go and See opportunities, with organised visits to the Festival of Thrift in Redcar, Hepworth Gallery and Yorkshire Scultpure Park and performances of Do Not Enter the Monster Zoo.