My first run of calligraphy workshops for the Cultural Spring has drawn to a close.

I say first, because I’m delighted to announce that the course has been extended for a further 10 weeks, starting on May 12.

Every Thursday for the last 10 weeks, I’ve been introducing people to the art of beautiful writing at the St Mary with St Martin’s Church in Whiteleas, South Shields. 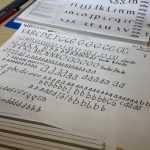 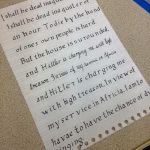 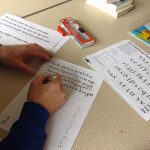 Starting with foundational hand (it does what it says on the tin), it has been great to see my first-time calligraphy students grow in confidence.

From practising basic strokes and outlines in pencil, to progressing on to pen and getting to grips with a broad edged nib, they are now happy to write at length.

You could hear the scratch of the nibs in the last couple of sessions, as people lost themselves in what they were writing. 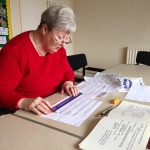 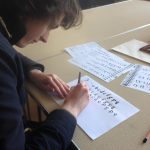 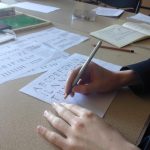 There have also been some unusual spin-offs, including supporting the efforts of one woman to give up smoking by keeping her hands busy!

It has been an enjoyable learning experience for me also, having previously run one-off workshops on a very informal basis in the past.

This has been the first calligraphy course I have run, and it has given me the confidence to look at running more workshops when my youngest child starts school in September.

In the meantime, I’ll be happily supporting the work of the Cultural Spring until the summer and hopefully beyond as the project enters its third and final year.