The Cultural Spring is looking to the future after celebrating its first three years.

The first phase of the project draws to an end this month, having widened participation in the arts in Sunderland and South Tyneside.

After securing funding for a further three years, it will now move into its second phase. 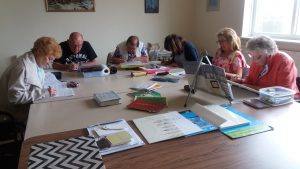 I have been involved in the project for the last year, running calligraphy workshops in Whiteleas, South Shields, one of the five wards targeted in South Tyneside.

The number of people coming along to the class grew from four to a full-house of 10 over the three terms and I’m hoping to be part of the new programme.

In the meantime, my group and I were invited to the Cultural Spring Christmas get-together at the Customs House in South Shields. 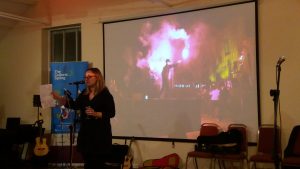 I love this quote in the introduction: “From the beginning our guiding principle has been that we will not ‘do’ arts and culture to our local communities.

“We’ve always been passionate about talking to our local communities and understanding what they want to see in their neighbourhoods.

“Our arts and culture will be delivered with them, alongside them – and with them.”

My workshops were one of 63 community workshops that took place in the third year, reaching 550 people and covering a wide range of art forms.

As well as running the workshops, I’ve been involved in the Cultural Spring as a participant since it started in 2014. 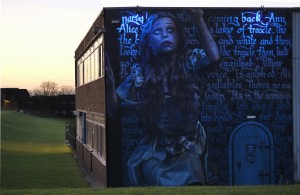 The launch event – The Great North Passion – took place on my doorstep.

The first Summer Streets took place in Southwick, Sunderland, where I grew up, and I remain a fan of the street art – like this Alice in Wonderland-inspired mural – created by Frank Styles.

I’ve also taken part in related research and development projects, such as Letters to Myself and the 10-week challenge set by the Cultural Spring and 64 Million Artists.

In October 2016, the Cultural Spring was awarded a further £1m by Arts Council England, allowing the project to continue up to December 2019.

It will work in five new wards in each borough and consultation sessions are taking place to shape the future programme. Find out more on the Cultural Spring website here.