I’VE long been an admirer of Driftwood Pens and the craftsmanship of the owner, Fred Baines. 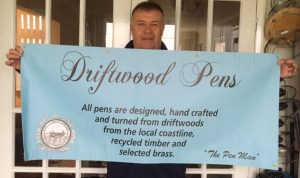 Turns out, his expertise stems from his background in engineering.

He started his working life as a draftsman and went on to serve an apprenticeship as an electrical engineer, although he later went on to spend 30 years with the fire service.

Fred made his first pen for wife Irene, who hails from Norway.

“She has written a journal since she was 11,” he said. “When we go away on holiday, she has a little diary that she writes comments in, then she fills her journal in when we get back. 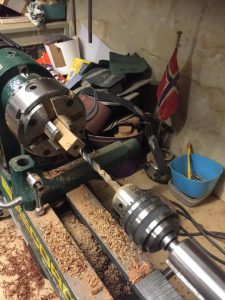 “She’s always liked fountain pens and I’ve always been good with my hands, so I said I’d make her one.

“I found a bit of wood and went on the internet to find out how to do it. I had an old lathe, so I put some tools together and made it on that.”

He was invited to attend the first Harton Quays Craft Market in South Shields last summer and sold out of his pens.

At this year’s Haven Point Christmas Fair, he sold 70 per cent of his stock in the first day, which makes me feel lucky that I managed to get a wooden calligraphy nib holder on day two!

“Fountain pens are coming back,” said the 67-year-old, who works from the garage of his home in South Shields. “Rollerballs are also very popular.” 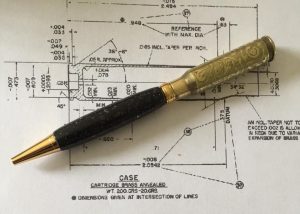 Fred’s hobbies include Nordic walking and target shooting, which provide some of the materials for his pens, as he has been known to whittle down a walking stick and shell cases.

“Everything’s recyclable in some way or other,” he said.

Fred also collects driftwood from Whitburn for his projects and has been known to break many a haversack bringing items home to work on.

He said: “To carve a walking stick took maybe 40 to 45 hours. I can turn a pen in three hours from start to finish.”