I’ve been reading up on Chinese calligraphy since giving it a go myself as part of the Chinese New Year celebrations in Newcastle at the weekend.

In fact, the whole family tried it, with my son James, five, using the brush and ink to practice his ‘tricky words’ rather than Chinese characters, while his sister Sophie, three, dabbed away.

My hubby and I read our Chinese zodiac and copied the outlines for the Year of the Rooster (him) and the Year of the Dog (me) – and I got a ‘wonderful’ comment for my efforts. 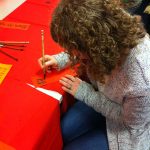 Concentrating on my brush strokes 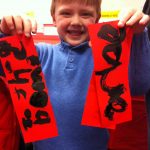 James and his work 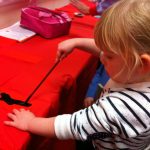 Sophie with her brush and ink 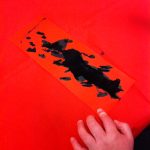 I’ve used a brush pen before, on a bauble I was asked to personalise, but using an actual brush with a block of ink was quite strange, being used to a dip or fountain pen.

It’s certainly something I’d like to explore further, but for now I’m happy creating a Pinterest board for the Chinese calligraphy – and art – that inspires me.

I’ve also added the Oriental Museum in Durham to my list of places to visit and I also intend to see the Chinese painting, calligraphy and crafts exhibition at Gateshead Library. 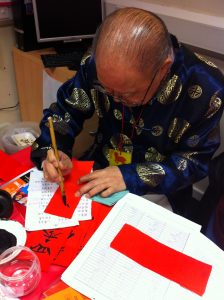 A Chinese calligrapher at work

An article for the Metropolitan Museum of Art describes calligraphy as “the visual art form prized above all others in traditional China”.

It goes on to explain that the elevated status of calligraphy reflects the importance of the word in China.

The Chinese written language began to develop more than 3,000 years ago and eventually evolved into five basic script types, all of which are still in use today.

Learning how to read and write Chinese is difficult because there is no alphabet or phonetic system. Each word is represented by its own unique symbol.

More than 50,000 characters exist in all, the great majority never to be used.

To read a newspaper requires knowledge of around 3,000 characters – a well-educated person is familiar with about 5,000 characters, a professor with perhaps 8,000.

That’s a lot of calligraphy outlines to learn!