2016 is the year I fell in love with Instagram.

It’s an obvious social media choice for a calligrapher, with it being so visual.

But I’d put off using it because I was unfamiliar with it. 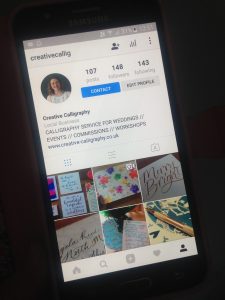 When I launched Creative Calligraphy in May 2014, I was confident in creating business accounts on Facebook and Twitter, because I was already using them personally. I knew how they worked.

It wasn’t until two years later that I finally added Instagram, after being given an encouraging nudge by Nicola from Sparkle Communications during a review of my social media.

I’m so pleased I did.

There is a fantastic community of calligraphers on there and it is a constant source of support, encouragement and inspiration.

I started by following the calligraphers and other people I’d connected with via Facebook and Twitter and grew my network from there.

By the autumn, I set my self a goal of reaching 100 followers by the end of the year and I’m now edging towards 150.

I recently converted my Instagram page to a business account, so now I’ve got a handle on how to use it, I can see how my efforts are paying off via the analytics.

The biggest number of impressions and largest reach since I joined Instagram has come from my involvement in the Holiday Swap for Pencils of Promise.

Participants agreed to make a donation to Pencils of Promise and were then matched with each other in a lettering and gift exchange.

I had so much fun doing it and it definitely made me feel part of the online calligraphy community – there’s even a Instagram hashtag for it – #calligrafriends.

The post that attracted the most engagement was actually a re-post from the @wearesparkle account of a lettering gift I’d produced for them.

I now try and post once a day, or at least every other day, and I’ve even posted a few videos.

Again, an obvious thing to do as a calligrapher, but way out of my comfort zone!

I haven’t used Instagram stories yet and I don’t necessarily style my posts, although I do sometimes add a filter to make my smartphone pictures look a little smarter!

Perhaps I’ll get a little braver in 2017 and you might see more of me!

In the meantime, I’ve just signed up for another lettering challenge in a bid to kick-start my modern calligraphy practice for 2017. Follow me @CreativeCallig to find out more.

You can also see what my #2016bestnine images were based on the number of likes.