A FORMER boss once told me it takes six months to settle into a new job. 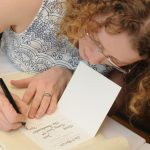 Well, today marks my half-anniversary of being a businesswoman, sole trader, mumpreneur – whatever you want to call it!

It’s been a steep learning curve and I’ve being taken out of my comfort zone on more than one occasion, but I don’t regret going down the self-employed route for one moment.

It may have been kick-started by redundancy, but launching my own business has turned a dream I once had almost six years ago into a reality.

Six months is a good time to take stock of what I’ve achieved so far. 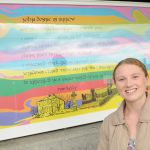 My calligraphy forms part of a public art installation at Bede Metro station in Jarrow.

I’ve shared my skills with over 150 people, through workshops at Bede’s World in Jarrow and Ridgeway Primary Academy in South Shields.

I’m a member of two networking groups that have been a constant source of support and advice – The Inspire Network and The Enterprise Club at North East BIC.

I’ve also made contacts through exhibiting at several wedding fairs and leafleting complementary businesses in South Tyneside and Sunderland. 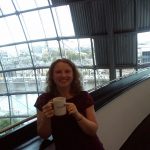 I’ve featured in the Shields Gazette, the Sunderland Echo, Belle Bridal magazine and Your North East Wedding magazine, as well as several online listings for the wedding industry.

My website is up and running and I’m starting to get feedback on my blogs.

Let’s see what the next six months brings!