It was with some trepidation that I looked forward to taking part in a calligraphy workshop with renowned calligrapher Gaynor Goffe.

I was invited along to the Northumbrian Scribes session by its chairman, Susan Moor, whose calligraphy classes I attend, and was intrigued by the style of calligraphy I would be learning.

Goffe was described to me by a classmate as the doyenne of flourished italic. 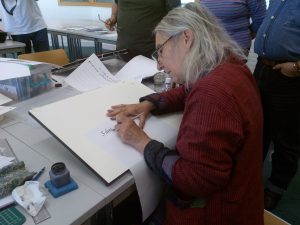 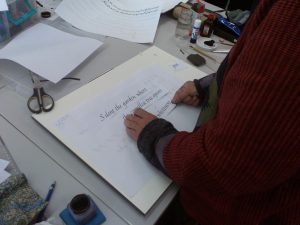 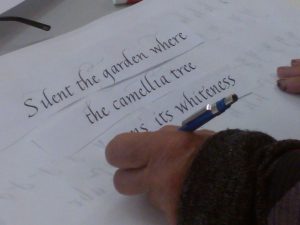 The style is similar to the formal italic script, with the addition on flowing ascenders and descenders – perfect for wedding invitations, poems and quotes.

A selection of Goffe’s work was laid out on several tables before, during and after the workshop, with each piece showing the versatility of the script. 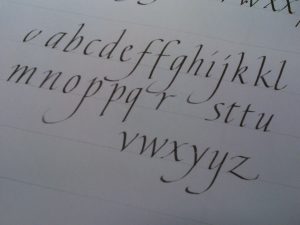 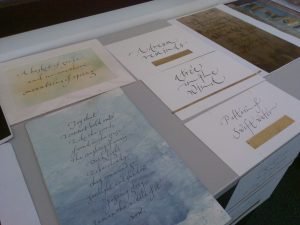 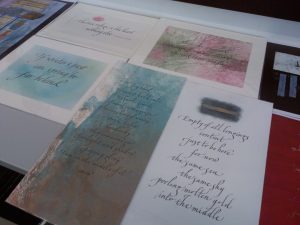 It was amazing to watch her hand (the left, surprisingly) glide over the page as she wrote.

I must admit, italic is not a script I use regularly, although my foundational hand has developed some of its characteristics over the years.

Fortunately, Goffe was happy to take those who needed it through the basics and I started by drilling the various letter groups in pencil before I was let loose with my calligraphy pen! 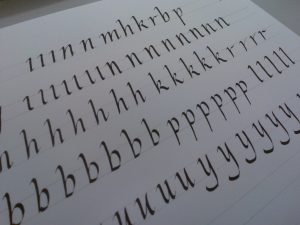 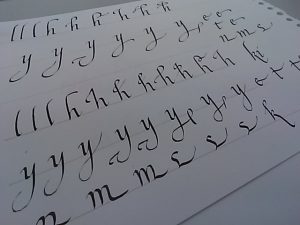 After proving my alphabet was acceptable, I was given a short text to write before playing around with its layout by cutting and sticking.

Then it was time to pencil in the flourishes, which I found quite hard to do, despite watching Goffe give several demonstrations. Nothing I came up with looked as good or as natural as hers!

But after she stepped in with a bit of one-to-one help, I stopped overcomplicating things and added some simple flourishes in pencil, before copying them in pen on a separate sheet of paper.

They were then cut out and added to the layout, giving me a finished template to work from. 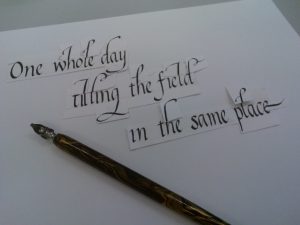 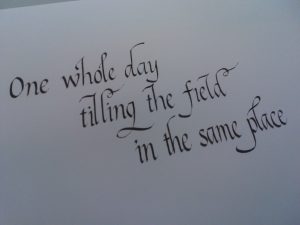 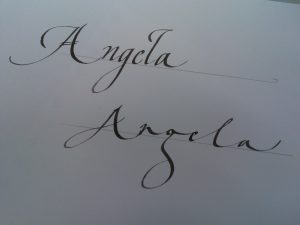 I managed to get the text written before the end of the five-hour session, and although my spacing needs some work, I was really pleased with the result.

Goffe was also kind enough to write our names in her inimitable style, including stretched flourished italic, which is something I will treasure.