I’m absolutely delighted with the way a recent commission has turned out.

Katie Cochrane came to me on the recommendation of Carrie Dennison, the artist I did a lino print workshop with at the end of last year.

She was looking for a calligrapher to do the inserts for her wedding invitations. 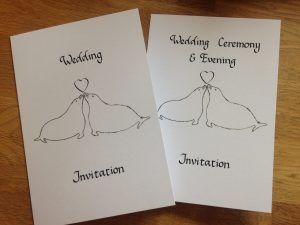 Her fiancé, Mark Gilbert, had come up with a simple illustration for the front of the A5 cards, and the couple were looking for someone to write the details inside.

With 85 invitations to produce, along with information cards and reply slips, hand-writing each one would have been time consuming and costly (although not impossible).

The solution was to digitise my calligraphy and I called upon the expertise of graphic designer Hollie Ellis, of Hollie Ellis Design, and printer George Elliott, of Elliott Print and Design, to help put everything together.

Both were fantastic to work with from the start.

I wrote my calligraphy in black ink as I would normally, but on an A4 sheet of paper, to make sure nothing would be pixelated when it came to scanning and changing the size of the lettering. 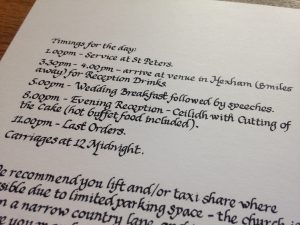 I wrote ‘master copies’ for the day and evening wedding invitations, information cards and reply slips, before scanning them in and e-mailing the files to Hollie.

She then got to work on created the design for the card, with Mark’s sketch of two nose-to-nose seals forming the basis for the front, along with my italic calligraphy.

Initial proofs were sent to Katie and Mark for their approval and after a few tweaks, they were ready to print, although George did carry out a final check!

He was also kind enough to print a complementary batch for me and I was really pleased with the results, but the verdicts that mattered were those of Katie and Mark.

Fortunately, I got an e-mail from Katie the next day, saying: “Just to let you know the invitations have arrived today, and they look lovely! Many thanks indeed for your calligraphy and for co-ordinating everything.”

It was my pleasure and Hollie and George enjoyed the collaboration too.