GOTHIC script is something I haven’t practiced since I first took up calligraphy.

So when I saw a gothic calligraphy workshop being advertised, I signed up straight away.

It helped that it was being held at the wonderful Keeper’s Café in Dipton, County Durham.

My friend and I took part in a lino-print workshop there last year and it was brilliant.

The delicious coffee and cake included in the price helped too! 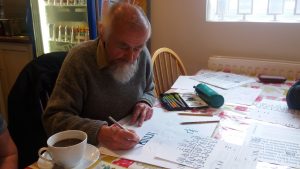 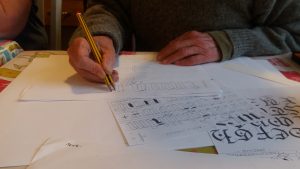 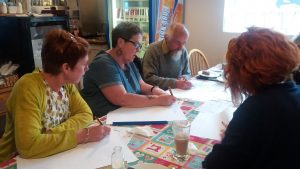 The workshop was led by Chris Bowen, a calligrapher and former lecturer based in nearby Consett.

He brought along some of his work, which is quite abstract and likely to “give you a migraine”.

That’s how Chris said his style was recognised by those familiar with it!

My eyes were certainly drawn to the beautiful strokes and sweeping flourishes create with pen and paintbrush. 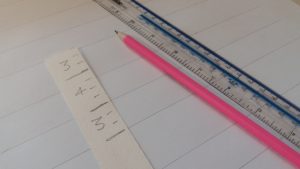 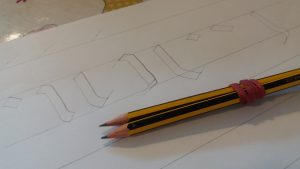 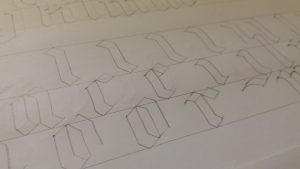 Chris started off with a demonstration using two pencils taped together to mimic a calligraphy pen nib.

It’s an exercise I remember from my school days and it took a while to get used to again!

I felt much better when I finally got a pen in my hand and Chris, like me, is a fan of the Pilot Parallel Pen.

Gothic script is very angular and straight and I struggled at first as I kept slipping into Gothicised italic, which has more curves.

But with a little discipline and almost two hours of practice, I finally got the hang of it. 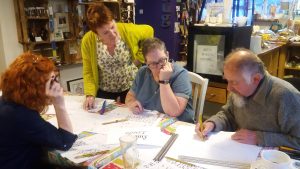 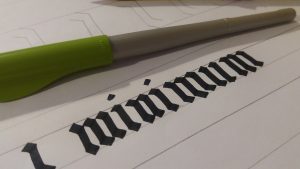 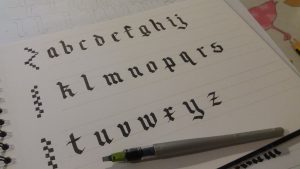 I also picked up some tips for leading my own workshops from Chris’ format and style.

I felt particularly inspired by a story he shared about a former Queen’s scribe, who spoke of the human element of calligraphy and pointed out that calligraphers aren’t mechanical.

Calligraphers tend to be their own worst critic and I do tend to fret if a stroke goes awry or something doesn’t look quite right, to me anyway, in a commission.

But that’s why people pay to have something handwritten – it’s the quirks of the individual calligrapher’s style.