I haven’t wanted to say anything about this until now, in case I jinxed it, but my calligraphy is going to form part of a fantastic new art installation at Bede Metro station in Jarrow! 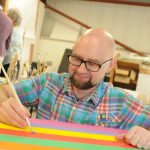 I was asked by artist Mark Gibson to get involved after a chance meeting in the reception of Bede’s World, where his Hive Art Studios is based.

It was the day before he was due to pitch his designs for a series of panels at the revamped station to bosses at Nexus.

I heard from him a little while later, having secured the contract, and set about writing for him a passage from the Venerable Bede’s Ecclesiastical History of the English People, comparing a man’s life on earth to that of a sparrow’s flight, and some poems by local writer Tom Kelly. 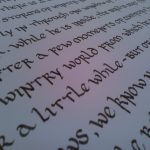 I opted for black, uncial hand, to reflect the medieval writing style of Bede and the other monks at the famed Wearmouth-Jarrow monastery.

I handed the pieces over to be scanned and added digitally to the huge panels Mark and other volunteer artists had created, although I wondered how well it would work and whether they’d be able to enlarge my lettering, which I’d written with the biggest nib I could find! 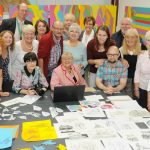 The people involved in the Metro art project

My fears were proven to be unfounded, however, when I was invited to a Press photo call for the project and saw how everything had been brought together via the magic of computer-aided design.

The panels are very vibrant in colour and as well as my calligraphy, they feature local landmarks and various local groups have been involved, so there’s a real sense of community about it.

I can’t wait to see what they look like when they’re up and hear what people think of the artwork. A lot of hard work has gone into it and I hope it brightens up what could otherwise be a dreary train ride or long wait at the station.

To see the Shields Gazette article on the project, click here.

Photographs of Mark Gibson and the group courtesy of Nexus.