Have you heard about the Just a Card campaign?

I have been following one of its team members, Kate Marsden, for quite some time on Twitter.

She was one of the lovely artists featured in a subscription box I ordered a while back and I remain a fan of her urban-inspired textile design work.

Just a Card is sharing a “vital” message. 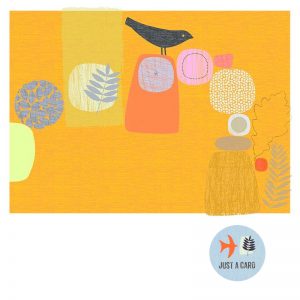 The campaign aims to promote the importance of small sales, such as cards, to artists, designers and makers and in turn, encourage people to support independent businesses.

It’s a message you can’t really argue with. And I have first-hand experience of the boost even the smallest order can give you.

The campaign, set up two years ago by artist/designer Sarah Hamilton, is supported by The Design Trust and lifestyle and craft magazine Mollie Makes.

It has a strong social media presence, including its own Twitter hour and a weekly ‘Have You Met?’ feature on Instagram to build the profile of artists, designers and makers.

Sarah said: “Since starting this campaign I’ve been inundated with messages from shop/gallery owners and artists/designers/makers who say how vital our message is.

“The buying public said they were often embarrassed to make a small purchase as they felt it appeared mean. What a shame!

“You’d never say that about a big chain, so the little guys lose those vital pounds.

“Our aim is, by recognising our distinctive logo, people will be prompted to think again before they say ‘how lovely’ to the shop owner and rapidly turn heal.

“Our campaign uses cards as an example, as people always need cards, but any item lovingly created is surely worthy of a purse raid.”

“If everyone who’d complimented our beautiful gallery had bought just a card, we’d still be open.” 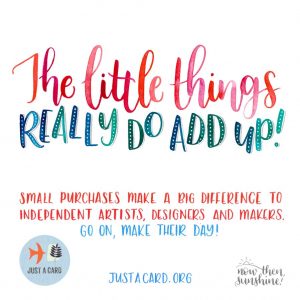 Sarah was inspired to create the campaign, which she describes as a “labour of love”, after reading this quote from the owners of a gallery that had closed.

It’s a message I’ve kept in mind and acted upon, most recently buying four gorgeous cards from Flutter by Lorraine for my children’s teachers and teaching assistants.

I’ve kept an eye on the Twitter hour – #justacard from 8pm to 9pm every Thursday – and been introduced to more inspirational artists.

They include Leeds-based hand-lettering artist and print maker Jules Birkby of Now Then Sunshine. Which reminds me, I need to order one of her Fight Like A Girl pin badges!

The Just a Card blog is also a great read, with a range of different artists, designers, makers, shops and galleries featured.

To find out how you can support Just a Card, visit the website here.