Today I finally get to reveal the finished pieces of illuminated lettering created by my Thursday morning calligraphy class.

Having been together for around two years now, we decided to shake it up a bit this term, by working on a project that would put our calligraphy skills into context. 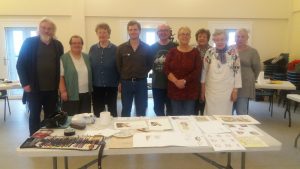 Members of the group with Graham Hodgson (fourth left).

We successfully applied for funding from the Cultural Spring – the organisation that first brought us together – and received £810 via the Your Art scheme.

This enabled us to bring in a guest artist, Graham Hodgson, who took care of the illuminated lettering side of things while I taught uncial script, a medieval style of calligraphy.

It also paid for a trip to the parish church of St Mary and St Cuthbert in Chester-le-Street, to see a facsimile of the famous Lindisfarne Gospels.

The rest of the funding was used to cover room hire and the cost of materials.

Some members of the group are already keen artists who attend some of Graham’s classes, while others hadn’t picked up a paintbrush since they were at school.

We also had a couple of newcomers who had never held a calligraphy pen before, so there was a real mix of abilities, but everyone was keen to have a go. 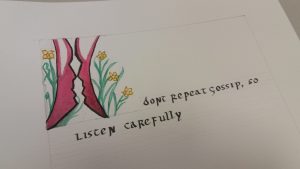 We spent the first few weeks practising the uncial alphabet (only 26 letters, as there is no upper and lower case – bonus) before choosing our quotes to illuminate.

We then worked on our layouts and each person had a rough draft, or an idea in their head, of what they wanted their final piece to look like ahead of Graham’s sessions.

Graham made suggestions on what images to use in the illumination, taking inspiration from each person’s chosen quote, for example, two faces looking at each other to form an ‘I’ down the middle for a quote about gossip.

His involvement was integral to the success of the project, as illumination and watercolour painting are not my strong suits and I was happy to leave it to the expert!

Planning our next project

The group got a lot out of working with Graham and said they would have liked to spend more time with him, so there may be another funding bid going in!

We had one last session before breaking up for Christmas to finish everything off. Some were more finished than others, but everyone had something to show for their hard work. 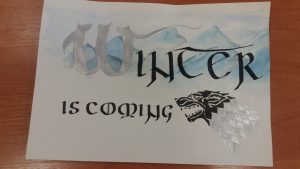 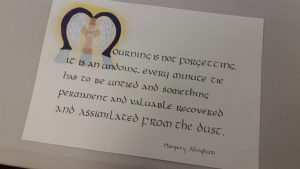 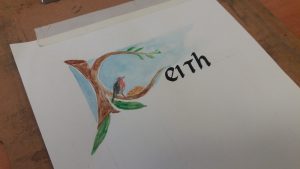 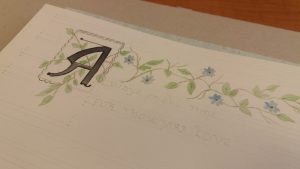 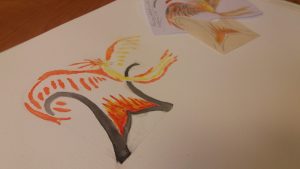 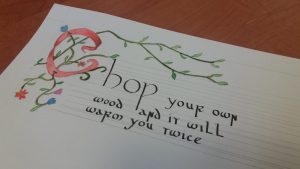 Feeling inspired by the lettering found in medieval manuscripts, we’re looking to learn more of these styles in the new year.

The class, which meets at Westoe Crown Community Hub in South Shields, is full at the moment, but if you’d like to learn calligraphy with me, keep an eye on the workshops section of my website and on social media for all the latest dates.