Are you taking part in InCoWriMo? 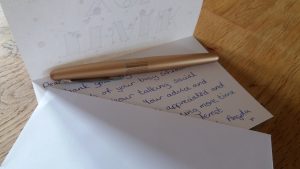 I was totally unaware of it until last year, but it’s actually been going for a while.

Participants basically agree to write a letter a day for a month, starting on February 1.

But you don’t have to dash off reams and reams of paper – a simple note or a postcard counts.

You can write to someone you know or a complete stranger.

You can write to the same person every day if you like!

You just have to commit to writing 28 letters during the month of February. 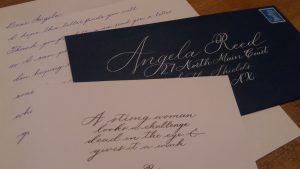 Last year I received an InCoWriMo letter from Joyce Lee at Artsynibs and I still have it.

Our Twitter exchanges about it caught the eye of The Pen Shop and I ended up working with them on some blog posts about calligraphy.

Seeing as InCoWriMo had such an impact last year, I thought I’d be more proactive this year.

My love of sending letters has also been reawakened by taking part in the Letter for PoP campaign and sifting through my old penpal letters.

And after taking part in the Show Me Your Drills lettering challenge on Instagram in January, I need a new project to drive my calligraphy practice. 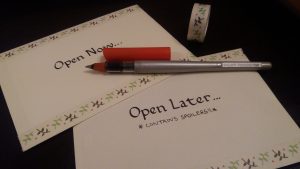 And if you’d like to find out more about InCoWriMo and take part yourself, visit the website here.

There’s a list of people on there who would love to receive a letter if you get stuck.

There are people taking part from all over the world.

I’ve selected 20 from the list to get me started and I can’t wait to see if they reply!