My Thursday morning calligraphy class had an extra special treat this week when we headed off on our first field trip. 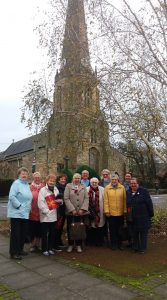 This term’s theme has been inspired by illuminated medieval manuscripts like the Lindisfarne Gospels, which were written right here in the north east.

I’ve been teaching uncial script, which is based on the letters used in manuscripts written in England in the late seventh and early eighth century.

Local artist Graham Hodgson will then show the class how to illuminate the first letter of their chosen pieces of writing.

Thanks to funding from The Cultural Spring’s Your Art scheme, we were able to visit The Parish Church of St Mary and St Cuthbert in Chester-le-Street.

It holds a facsimile of the Lindisfarne Gospels, which was purchased following a fundraising appeal launched in October 2003.

The Lindisfarne Gospels were produced in the island monastery of Lindisfarne, off the coast of Northumberland, at the end of the seventh century. 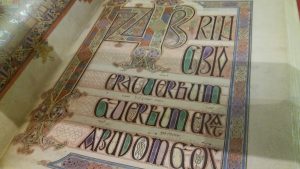 A facsimile page from the Lindisfarne Gospels.

Created in honour of St Cuthbert, it is one of the world’s masterpieces of book painting and a precious relic of early Christianity in England.

The original copy came to Chester-le-Street along with the monks when they fled Lindisfarne due to Viking raids in around 875AD.

One of the stained glass windows in the church commemorates this and other aspects of the Gospels’ travels.

Eadfrith, Bishop of Lindisfarne, was credited with writing the manuscript. He was a highly trained calligrapher and he used insular majuscule script in the manuscript.

The original copy can be found in the British Library in London. The text is complete and undamaged, although the original binding has since been replaced.

Stewards Joe Butters and Geoff Cork kindly showed us around the church building, which dates back to 1103 and has many unique features. 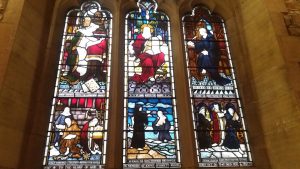 The stained glass window depicting the journey of the Lindisfarne Gospels.

They include a pulpit made of dark wood that can only be found in the River Wear, pillars made of Frosterley Stone, 16 beautiful stained glass windows and an anchorage.

The anchorage, which has been turned into a museum, is one of the very few that remain in the country and was the home, if you can call it that, of Chester-le-Street’s anchorites.

These were men, not necessarily in holy orders, who volunteered to be walled up in the house for life to follow a strict regime of prayer and contemplation.

Both Joe and Geoff spoke about the church with pride, pointing out its links to the Lambton family as well as the Lindisfarne monks.

The facsimile of the Lindisfarne Gospels is housed in a glass cabinet near the entrance to the church, at the back of the pews.

Visitors are able to turn the pages to view the manuscript and its impressive ‘carpet pages’ marking the start of each of the four Gospels – Matthew, Mark, Luke and John.

I found it particularly interesting to see the Old English (or Anglo-Saxon) translation written in red ink beneath the original Latin script.

The translation was added by the priest Aldred in the scriptorium at Chester-le-Street in around 970AD.

He added a statement on the last page of the Gospels, attributing their compilation to Eadfrith, their binding to his successor, Ethelwald, and their cover adornment to Billfrith, the anchorite. 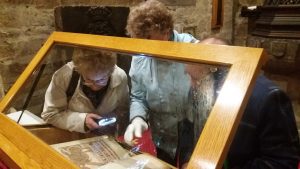 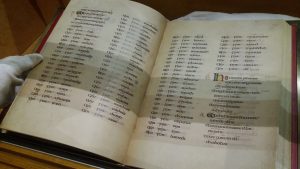 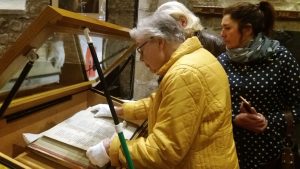 I certainly came away knowing a lot more than I did before about the Lindisfarne Gospels and the remarkable history of Christianity in the north east.

And more importantly, my class came away bursting with ideas for their own illuminated lettering projects and a better understanding of the historical context of the uncial script they are working on, which was the main aim.

I can’t wait to see their final pieces!