I had no idea it was that old, until I was given a brief run-down of its history at the opening of the International Women’s Day Conference 2017 at the University of Sunderland. 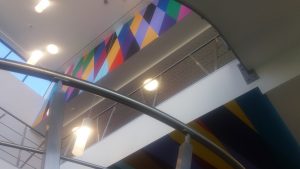 It was the first event to be held at very impressive Hope St Xchange, a contemporary workspace for innovation-led businesses at the university’s city campus.

The theme was Ordinary Women with Extraordinary Stories, linking in with the overall International Women’s Day theme for 2017 of Be Bold for Change.

All the speakers, who came from a wide range of backgrounds, had to be bold at some point in their life and career.

I love a good back story and I’m always fascinated by the paths people have taken to get them to where they are today, especially other women who have  set up their own business. 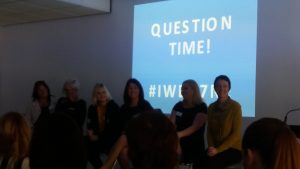 Some of the speakers during the Q&A session.

The keynote speaker was Fiona Cruickshank, an angel investor and chairman of the Community Foundation in Tyne & Wear and Northumberland.

Her career began as a pharmacist and in 1999, she founded a successful business that she sold less than 10 years later for £20.1m, catapulting her into the public eye.

She talked us through what she described as the four stages of her business journey from pharmacist to philanthropist, with anecdotes about the barriers she faced and sacrifices she made over the years.

“I don’t believe women can have it all, at least not all at once,” she said.

Laura Middleton , from The Office Rocks, spoke of her “flighty” career moves, from her first Saturday job in a show shop to travelling the world as an air hostess. 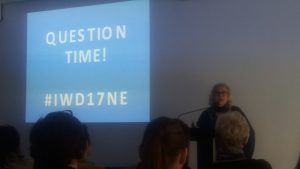 She also highlighted of the importance of flexibility in the workplace for women and the need for external support when you’re running your own business.

“You need support around you,” she said. “Get your friends and family bought into it.”

Kimberley Ivory re-entered the workplace four years ago after taking 13 years out with her four children. She is now HR manager for the Tudhoe Learning Trust.

She spoke of the responsibility she feels to provide opportunities for girls in education, as well as for her female colleagues in the workplace.

Kevin Haynes may have been the only male on the panel, but he is responsible for championing female talent as head of learning and development at Greggs.

The company has a female workforce of 14,000 and boasts a string of initiatives to help move them up the career ladder.

He opened with a sweet story about his daughter choosing that morning, after seeing an International Women’s Day discussion on the TV, to tell him that she loves him for the first time. 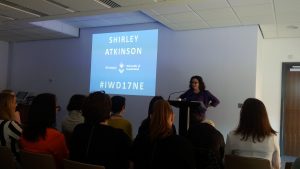 Shirley Atkinson, vice-chancellor of the University of Sunderland

Shirley Atkinson, vice-chancellor of the University of Sunderland, praised the event in her address to the 180-strong delegation before sharing some of her experiences as a woman in her chosen fields of employment.

She said equality of opportunity was key, adding: “The world won’t survive if it doesn’t recognise 50 per cent of the talented people that we have in our communities.”

Claire Hoy, principal lecturer for learning and teaching at the university, followed with her career story and spoke of how university changed her life.

But she added that although more women are entering higher education than ever before, less than half go on to achieve what men with the same degree qualifications achieve.

Tina Young, who runs a holiday service for dogs called Barking Mad, described how her personality changed as she tried to fit into the corporate world.

In the end, she was bold and managed to escaped the rat race. Both she and her husband quit their jobs, moved to the countryside and embarked on new career paths. 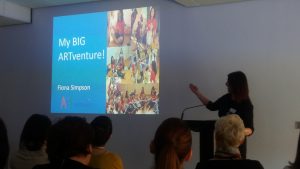 Fiona Simpson, from Artventurers, also touched on the pressure faced by women in trying to fit in with a certain stereotype.

Having attended an all girls’ school, the expectation was for her to go into one of the traditional professions.

“I was actively discouraged from seeing art as a career,” she said. “It was lawyer, doctor, teacher or accountant.”

She became a solicitor, specialising in family law, but when she started a family of her own, she left the profession.

The time she spent at home with her children inspired her to start running messy play art classes for toddlers and she now oversees 23 Artventurers franchises.

She said she had always been determined to carve out a career in leisure and tourism, joining a travel agent on a YTS placement after leaving school.

I love that she used to have to write flight details on the airline tickets back in the day.

She worked her way up the ranks, but spoke fondly of the male mentors who had encouraged her along the way.

The conference closed with a Q&A session covering how the women on the panel measure their success, what keeps them motivated and tips on networking.

I came away with plenty to think about and lots to feel inspired by.