Jarrow Hall is keeping the memory of Bede alive in South Tyneside.

Like many, I was shocked when Bede’s World suddenly closed its doors in February last year, leaving the culturally and historically significant site facing an uncertain future.

However, Groundwork South Tyneside and Newcastle (STAN) stepped in to manage the site and it is now fully re-open, following a soft-touch launch in October last year.

More the £120,000 has been invested so far in the redevelopment of the site, now known as Jarrow Hall Anglo-Saxon Farm, Village and Bede Museum. 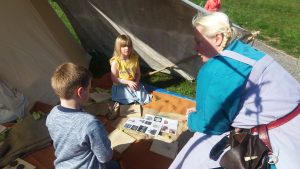 It has also hosted more than 1,000 schoolchildren in the last six months.

At weekends and during school holidays, however, it has been about attracting families and as regular visitors previously, we were excited to attend the re-launch day

We had the perfect weather to enjoy all the activities on offer, with an unusually sunny Spring day kicking off the Easter holidays.

James and Sophie got stuck into some Anglo-Saxon crafts and made rune necklaces, enjoyed a pony ride and explored the natural play scape before heading off to feed the animals on the farm.

A “treasured piece of local history”.

Groundwork STAN has been working in partnership with South Tyneside Council and Tyne and Wear Archives and Museums on plans to improve the site.

Andrew Watts, chief executive of Groundwork STAN, said: “We are really excited to be able to open our doors with our full launch so people from the local area and beyond can see the work that has gone into restoring this treasured piece of local history.

“A central part of our work is continuing to preserve and improve Jarrow Hall for the benefit of both families and the academic community, and we are committed to continuing the scholarly research into Bede and understanding the relevance and significance of the site to the history of the area.”

It has also welcomed Hive Coffee Company to run the café at Jarrow Hall House, which has been fully renovated, with Georgian-era expertise provided by Durham University. 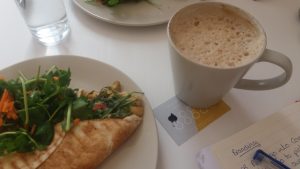 Being a bit of a coffee and cake addict, I must say that Hive is thoroughly deserving of the buzz (sorry) surrounding its launch.

I have three inky splodges on my loyalty card and I’m sure I’ll be supping my free coffee in no time after enjoying a delicious business lunch with Hollie Ellis Design and then returning with the family on launch day.

On my first visit, I had the lemon chicken flatbread, beautifully presented with a fresh side salad (many of the ingredients are picked from the adjoining herb garden) and a cappuccino.

I couldn’t resist another cappuccino on my second visit, although the chai lattes ordered by the couple behind me sounded so lush I’ll be having one of those next!

There was plenty of room for the children to run around and play outside too and I set them away collecting pine cones so the hubby and I could enjoy our drinks in (relative) peace.

Jarrow Hall will be opened every day throughout the Easter holidays, with educational fun for all ages, including farm talks, lectures, live combat re-enactments and authentic Anglo-Saxon crafts. 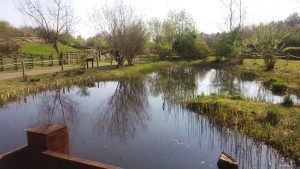 Leigh Venus, culture and heritage operations manager for Groundwork STAN, said: “With this as the start of an exciting new period for Jarrow Hall, we are committed to preserving the historical elements at the same time as providing a range of activities that will entertain the entire family and ensure the site is enjoyable for all.

“Visitors will be able to witness the Anglo-Saxon village being renovated by authentically-attired workers using traditional wattle and daub building techniques.

“We had a choice to renovate the site behind closed doors or actually show the public how and what the renovations will consist of, so this will be taking place at the same time as the battle re-enactments and crafts.”

The Father of English History

Jarrow Hall ultimately exists to celebrate the extraordinary life of the Venerable Bede, the Father of English history.

The monk, author and scholar lived at the Abbey Church of St Peter and St Paul, a double monastery at Jarrow and Monkwearmouth in Sunderland.

I was a little disappointed that very little seems to have changed in the museum.

The wire sculpture of Bede’s head has been taken down for refurbishment, but the replica of the Codex Amiatinus is still hidden away.

There is however, a new indoor play area for children.

When I was invited to attend a showcase event for businesses at Jarrow Hall in September last year, I remember being told the museum was a bit stuck in the 1990s!

But with work still going on around public access to the site, I’m sure it won’t be long before the museum is brought up to date.