A FRIEND has very kindly pointed me in the direction of an intriguing new exhibition opening at the Tyneside Cinema in Newcastle. 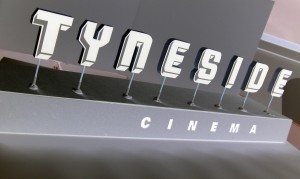 Rachel Reupke’s new video installation, Letter of Complaint, is billed as a witty and stylish celebration of the art of the complaint letter.

It presents three characters putting pen to paper to express everyday grumbles and urgent demands, delicately exploring the act, effect and awkwardness of making yourself heard.

Reupke’s characters sit at traditional writing desks as they carefully reveal their banal, absurd and sometimes harrowing causes for complaint, as well as a fetish for writing equipment including pens, inkwells and quills. 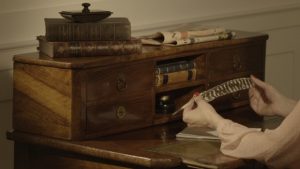 Hmmm, a fetish for writing equipment – suits me perfectly. I gave a yelp of delight when I spotted the calligraphy section of an art shop recently and I can’t walk past the likes of Paperchase without going in for a ‘browse’ (also known as a feel of the pretty things).

The idea of everyday grumbles also brings back fond (?) memories of the many Letters to the Editor contributions I came across during my 13 years in journalism – long before people could comment on stories via Facebook and Twitter.

I suspect this is why my friend, who still works in the newspaper industry, wants us to go along! 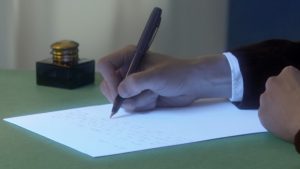 Letter of Complaint follows an ongoing interest in the artist’s work in the expressive properties of stock images, and playing with how stillness and awkwardness transform these images, which we are exposed to every day in print advertising and online.

Following a showing at Cubitt, London, Letter of Complaint will be shown in The Gallery – the cinema’s new purpose-built space dedicated to the commissioning and exhibition of artists’ moving image work – until Sunday, April 12, 2015.

The piece was commissioned by Cubitt in partnership with Tyneside Cinema.

Reupke will be in conversation in The Gallery at the Tyneside Cinema on Thursday, March 19, from 6.30pm. Tickets are £2.50. For further details and booking see www.tynesidecinema.co.uk/reupke.