I love it when letters drop through my door!

And I’m not talking the ordinary bills and junk mail – I mean proper, handwritten, well thought out letters. They make me smile.

In February I took part in International Correspondence Writing Month (InCoWriMo) and I’ve since had several responses from the people I chose to write to. 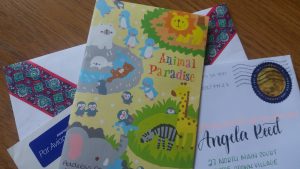 Some of my InCoWriMo replies

The first one was a Harry Potter postcard from Maria in Galway, Ireland.

She revealed that she had lived in Newcastle last year and was happy that someone from the north east of England had written to her. It really is a small world!

My second letter was hand-delivered when I bumped into Fiona, from Darlington, at a meeting of the Journaling North East group.

She was the closest person I wrote to and I was the nearest person she heard from!

“Your letter surprised me the most, I think,” she said.

Letters are a glimpse into different lives

The other replies have come from much further afield – Shir in Israel, Sarah in Canada, Elena in New Zealand, Tiffany and Erika in the USA and Jessica in Malaysia. 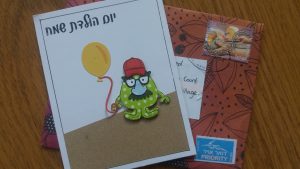 My birthday card from Shir

They vary in length, from a few lines to several pages, but they all offer a glimpse into different lives, which is what I find so fascinating about penpals.

For example, I wrote to Shir because I’m pretty sure there’s more to Israel than what you see and hear on the news.

Although she lives in the centre of the country, between Jerusalem and Tel-Aviv, she and her family still feel the effects of fighting in the north, but they keep to a normal routine of work and family life.

Shir sent me a handmade birthday card with a greeting written in Hebrew. It took me a while to figure out I had to open it from the left, not the right!

Sarah stood out for me as a British ex-pat now living in Vancouver with her boyfriend, after they took the leap and applied for two-year working holiday visas. I’m very jealous.

She apologised for her childish taste in stationery, but I loved it and I’m going to find something equally as childish for my response! 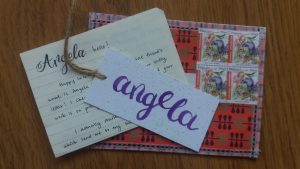 My name tag and letter from Jessica

Elena has also moved around a bit since leaving home in the Republic of Moldova in her early 20s.

Having lived in Europe and Taiwan, she married an Australian living in New Zealand and now lives in the “beautiful” wine region of Marlborough on the South Island.

She has been toying with the idea of learning calligraphy and took my letter as a sign that she should give it a try, so I’m definitely going to send an encouraging reply and maybe a few gifts.

Tiffany also enjoys calligraphy and has just bought a Brause ‘blue pumpkin’ nib to start practising copperplate. She also runs her own business, so again, we have shared interests.

Erika confirmed that Iowa is pretty much how you see it in Field of Dreams! Like me, she is also practising brush lettering and keeps a bullet journal.

Jessica is also a brush lettering newbie, although she sent me a lovely name tag that I have tied onto my calligrafriends noticeboard. I loved the stamps on her envelope.

My aim for the Easter holidays is to get my replies to these lovely letters sent out, as there are definitely some new penpals in the making there!