InCoWriMo has been my project for February and I’ve really enjoyed taking part.

International Correspondence Writing Month – to give it its full title – encourages people to send a letter a day throughout the month of February. 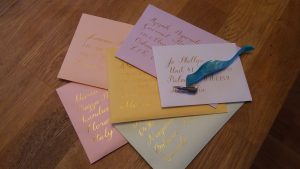 I’ve recently rediscovered my love of letters, after taking part in a letter exchange before Christmas and rediscovering some old penpal letters from my teens.

So I used InCoWriMo as an excuse to make friends around the world again!

Not surprisingly, the people taking part share a lot of creative interests, such as writing, calligraphy, arts and crafts, bullet journaling and a love of stationery.

I mainly used the address exchange on the InCoWriMo blog to fill my calendar for the month, although I also included friends and clients.

A number of people stood out because we shared the same interests. 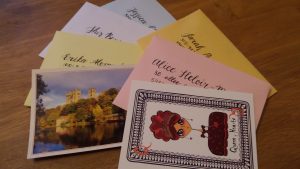 For example, a woman in Argentina said she was trying watercolour painting, brush lettering and bullet journaling – three things that I’m also trying to get started with.

I also wrote to another brush lettering newbie in Malaysia and calligraphers in Italy, Hong Kong and the USA.

Location also played a part – I wrote to a woman who lives in Niagara Falls, Canada, because I’ve been lucky enough to visit twice and was curious to know what it’s like to live there.

I spotted a Durham address, but in North Carolina, USA, so I sent a postcard from its north east England namesake.

I also sent a postcard to an English ex-pat now living Vancouver, a city I’d love to visit, mainly due to my obsession with the DC Comics shows being filmed there. 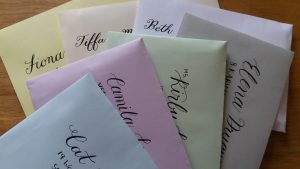 I stopped short of asking her if she’d ever bumped into the Green Arrow or the Flash!

I also penned letters to people in countries I know little about, or only ever hear about on the news, like Israel and Mexico, to find out more about the culture and way of life.

I also sent a couple of letters to people in the UK, the nearest one being Darlington, where I did my journalism training. Turns out she’s also a member of a Facebook group I’m in for bullet journaling enthusiasts in the north east!

I also penned a letter to one of my Instagram followers who, like me, took part in the Show Me Your Drills lettering challenge last month and she has promised to write back.

I’ve seen some of her InCoWriMo correspondence on her Instagram feed and I can’t wait to get her mail from France. 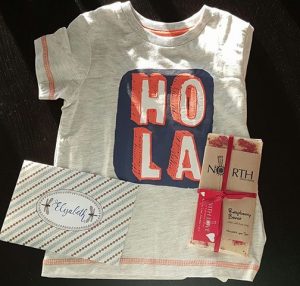 I also sent a letter to my calligrafriend Joyce Lee, from Artsynibs, who introduced me to InCoWriMo when she took part and sent me a letter last year.

And as promised, I sent a letter to my Austrian penpal Elisabeth, taking our 20-year correspondence back to where it began, rather than via e-mail and Facebook!

InCoWriMo has been a great opportunity to practice my calligraphy and lettering, as well as get back into the habit of writing longhand after years of shorthand and bashing away at a computer!

It’s also been a bit of a marketing exercise as I’ve had a great response to my social media posts about the challenge, including this very lovely blog post from my friend Michelle Nicol over at Wordstruck.

So, what’s next for March? I’ll have a think about that while I await the responses to my letters.