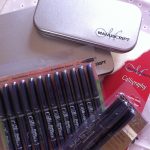 I’ve been using Manuscript pens for as long as I’ve been doing calligraphy, so I’m delighted to welcome them on board a new Creative Calligraphy project.

I first got in touch with Manuscript via Twitter, to see if they would be interested in supplying some materials in kind, and a few e-mails later, a box full of goodies arrived at my door!

The family-run company has kindly donated 20 three-nib calligraphy sets – ideal for beginners – and a Callicreative 12-pen italic marker set, which should make a good prize.

Its marketing team has also been very complimentary and supportive of my endeavours, which is a great confidence boost when you’re new in business.

Offering calligraphy workshops in schools could be an exciting avenue to explore. 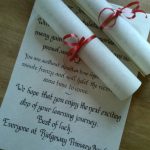 I was invited into the school to work with each year group by deputy head Alex Golden, after writing some scrolls for their Year 6 leavers at the end of the summer term.

The aim is to inspire a love of writing, which is a passion shared by Shropshire-based Manuscript.

Charlie Stockbridge, commercial director of Manuscript, said: “We are delighted to take part in this project with Angela and her Creative Calligraphy.

“Manuscript has always been active in the education sector, providing stationery and writing  tools for kids and adults and inspiring them to express themselves on paper.

“When Angela asked us to collaborate, it was then our pleasure to support her project.”

Their support is much appreciated.

Read more about Manuscript and their expansion plans here.