When I heard Imogen Owen was coming to the north east to promote her new book, I didn’t hesitate to snap up a ticket, even though it meant an almost two-hour round trip!

I follow her on social media and having seen her recent appearance on Channel 4’s Sunday Brunch, I was keen to meet her in person and hear more about her approach to modern calligraphy.

It’s a style I’m keen to try this year, but confidence is holding me back. 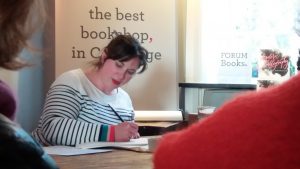 My calligraphy skills are rooted in more traditional styles, such as italic and copperplate, where there are rules to follow and it’s quite rigid. I like that!

I’ve never been a rule breaker and I’m a total perfectionist, so I’m concerned that modern calligraphy is probably never going to agree with me!

But it turns out my knowledge of copperplate is good grounding for modern calligraphy (although not essential) because they share the same basic elements.

Both involve using a pointed nib to create the thick and thin strokes that form the letters, applying light pressure for a thin stroke and pressing down harder for a thick stroke. 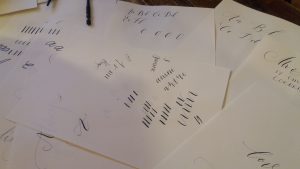 Some of Imogen Owen’s demo sheets

But when it comes to modern calligraphy, Imogen says you have to tear up the guidesheets!

“The more you study copperplate, the more it will help your practice, but if you become too strict with it, your work will become really rigid,” she said in answer to a question from the audience at the author event in Corbridge, Northumberland.

It was organised by Forum Books and took place at Tea & Tipple, where Imogen chatted about her work and the book – Modern Calligraphy Workshop – while demonstrating her modern calligraphy skills.

She said: “All calligraphy is a really nice thing to do because it is really relaxing and meditative.” 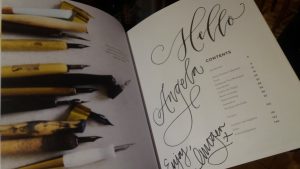 I noticed that Imogen writes quite quickly – but still beautifully – which she said stems from the same impatience that led to her teaching herself modern calligraphy a few years ago.

She has been teaching it to others for the last three.

She said: “It is a very different technique to start with, but one you start to practice, it becomes really intuitive. All you need is a basic pen holder and nib to get you going.”

Imogen recommends the Japanese G nibs, such as a Nikko G, which are traditionally used for Manga and are quite resilient, and Higgins ink for beginners, with a good quality paper so the ink won’t bleed (she uses Conqueror).

I’ll definitely keep that last point in mind when I sit down with my signed copy of Imogen’s book and put pen to paper. After all, I’ve got a new year’s resolution to keep!