CraftStash has launched a new calligraphy range and in the process, introduced me to a brand I’ve never come across before – Aladine.

I was asked to test out some of the products on offer, including the ‘Latin’ and ‘English’ dip pen and nib sets and Izink Calli & Co ink in old gold and copper.

As you know, I like to experiment with different nibs and inks, so here’s what I thought.

I love the packaging – it’s bright, easy to get into and shows off the products. 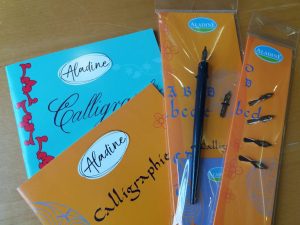 The ‘Latin’ writing starter set includes a pen holder and two nibs, while the ‘English’ set contains a pen holder made of lime tree and a Leonardt 30 nib.

Aladine is a French company, so I found it interesting that they include Leonardt nibs in their sets, as they are made in England by Manuscript Pen Company Ltd.

The nibs in the ‘Latin’ nib set of four are all Leonardt nibs – two ‘round’ and two Tape (70) nibs with top-loading reservoirs.

The four nibs in the ‘English’ nib set are also Leonardt nibs – a general drawing nib, a 256 drawing nib, a point pen nib and a Hiro Schragspit Feder No.54.

I couldn’t find the latter in my Manuscript catalogue – and Google led me to a Russian museum – so any further information would be most welcome!

Manuscript is one of my go-to suppliers, so I’m familiar with their round hand nibs, used for traditional calligraphy styles. 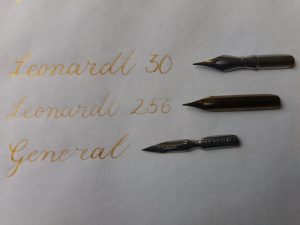 I’ve never used their Tape nibs before, however, which are cut with a right oblique that’s going to take some getting used to!

I like the way they held the ink though and the top-loading reservoir seemed less fiddly than the traditional round hand reservoir, which sits underneath the nib.

The Aladine holders were light and quite chunky and the nibs slot easily in and out of the holder.

I expected the ‘English’ nibs to behave like pointed nibs, but they’ve actually got very slight square tips, although they all produce fine lines.

The 256 drawing nib, according to the manuscript catalogue, is particularly good for versals and tendrils – and can be used on china and porcelain.

Again, the packaging on the Aladine Calli & Co ink is very pretty. 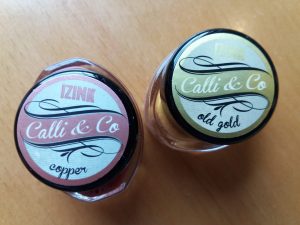 The 15ml bottles are very cute and a lovely shape, with colour-coded labels on the lids featuring calligraphy script branding and decorative flourishes.

They do have quite a strong smell though and require a bit of shaking.

However, once the pigment has been mixed, it doesn’t immediately start sinking back to the bottom again, giving you more writing time.

The inks flowed freely from each of the nibs from the Aladine sets, as well as my trusty Nikko G, with a pleasing metallic shimmer.

CraftStash is also stocking a range of Aladine calligraphy instruction books to match the sets – English, Latin and Chinese.

An exemplar from the ‘Latin’ instruction booklet

I’m not sure how the ink will react to the paper, as it’s quite shiny, but you could place layout paper on top of the guidelines for practice.

The Latin book features uncial, Caroline and gothic scripts, while the English one includes chancery hand and what I would describe as copperplate.

Both include notes on how to prepare and clean nibs and practice strokes, but I think some prior knowledge is required to make sense of the alphabet exemplars.

For example, the nib angle for writing and nib widths for guidelines are given, but unless you know what they are, the illustration will be meaningless.

And in the ‘copperplate’ section, there is no mention of how the thicker lines are created by applying pressure to the nib on the downstroke.

The books, however, have been put together with the help of the technical director of the National Centre of Calligraphy in Saint-Cyr-sur-Loire, so who am I to criticise?

Try the range for yourself

You can judge the books for yourself as I’m giving them away, along with a Latin starter set and set of four Latin nibs.

All you have to do to enter is click on the Rafflecopter link below and I’ll choose a winner on Thursday, August 9. Good luck!

In the meantime, you can check out the full CraftStash calligraphy range here.