The latest Northumbrian Scribes exhibition has opened in Sunderland. 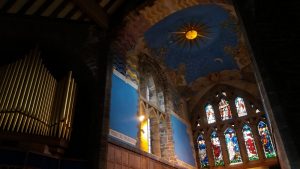 Built in 1907, it was designed by architect Edward Prior and features William Morris carpets, furniture by Ernest Gimson and Robert ‘Mouseman’ Thompson carvings.

Its foundation stone, now rather worn, was carved by Eric Gill,  a sculptor, typeface designer and printmaker, who devised the Gill Sans font, among others.

Calligraphy formed a key part of the Arts and Crafts Movement, which was a back-to-basics response to the industrial revolution, so the venue is a fitting location for the exhibition, entitled Living Letters.

I was invited to the exhibition preview and it was lovely to catch up with Northumbrian Scribes chairman Susan Moor and other members. 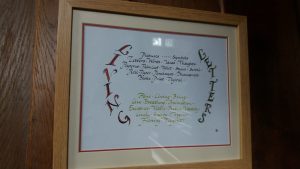 I also snapped up a copy of the group’s latest newsletter and two copies of its Calligraphic Calendar 2018, inspired by Northumbrian Parks and Gardens.

It features some of my favourites, like South Marine Park, Jarrow Hall’s Herb Garden and The Alnwick Garden, as well as some I’ve yet to discover, like Silksworth Park.

Living Letters as a theme has been interpreted in many different ways by the 17 calligraphers with work on show, using a variety of calligraphy styles, techniques and media.

Some had produced illuminated letters – perfect inspiration ahead of one of my classes tackling that very topic later this term – including several takes on ‘S’ from the Bible of Hugh Le Puiset.

Others featured letter inspired by living things and nature. 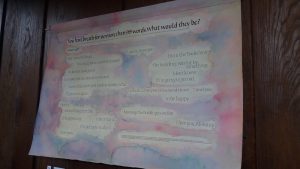 Susan’s piece, entitled 99 Words, features thought-provoking responses to the question: ‘You have breath for no more than 99 words. What would they be?’

The Society of Northumbrian Scribes was created to promote calligraphy, to help its members to enjoy it and to develop their own skills.

It welcomes all who are interested in calligraphy to its monthly meetings, which take place on the third Saturday of the month at the University of Sunderland’s St Peter’s Campus.

These are mostly workshop events, which are designed to help all individuals to enjoy and develop their calligraphy in an informal, encouraging and creative environment.

Living Letters is open from 9am to 1pm, Monday to Friday, until Tuesday, October 31. Entrance to the exhibition is through the Priestman Hall, in Talbot Road.