Calligraphy has taken a bit of a back seat for Melanie Dayus recently.

Frustrated by the lack of oblique pen holders available in the UK, she set about making her own.

This led to the creation of her business, English Pen Crafts, in September last year.

Experiencing the same frustration, I found Melanie via a blog written by Kate Watson, of Olive and Reid Studio.

I was amazed to find she was based just up the road from me in Washington, Tyne and Wear. 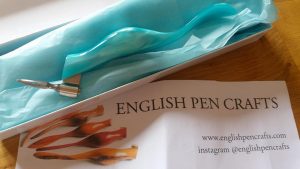 We agreed to meet up – and obviously, I couldn’t leave without ordering one of her gorgeous and increasingly popular ergonomic oblique pen holders.

All in the name of research of course – and to help motivate my modern calligraphy practice!

The ergonomic holders are made from acrylic pen blanks, many of which are sourced from The Turners Workshop in Killingworth, North Tyneside.

The blanks are then sawn and sanded using specialist tools.

“Polishing them up is the hard bit,” says Melanie, who spends many hours in front of the TV with sandpaper and pen holder in hand.

“I love doing the wooden ones, but the ergonomic ones are more eye-catching and more saleable. I can’t keep up with the demand sometimes.

“My calligraphy has taken a back seat – I seem to spend all of my time sanding!” 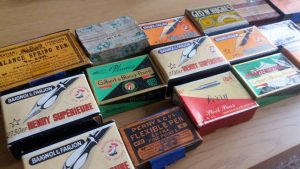 Melanie also spends a lot of time scouring the internet for vintage nibs and boasts quite a collection.

She was kind enough to take me through some of them and explain their properties.

The boxes were as pretty as the nibs, which date from the turn of the century up to the 1950s and come from British, French and US manufacturers.

Melanie worked for the MOD before redundancy almost six years ago nudged her into a career in photography, which sparked her interest in calligraphy.

“I started making posters that people could download and print and I thought it would be nice if I could add my own fonts,” she said.

Not that she has gotten round to further exploring this venture, as the pen-making has overtaken that as well!

Melanie sells her pen holders through her English Pen Crafts Etsy shop and she also has an Instagram page @englishpencrafts.