What have the Romans ever given us?

It’s an oft-quoted line from Monty Python’s Life of Brian that provokes quite a list of benefits, from medicine and education to wine and public baths. 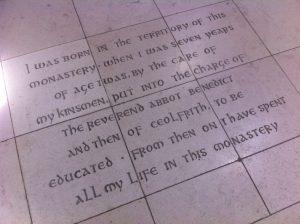 They also gave us the Latin alphabet – and western calligraphy is instantly recognisable by the use of Latin script.

The Latin alphabet first appeared in 600BC and by the first century, had developed into Roman imperial capitals carved on stone.

The second and third centuries saw the development of the uncial style, which was more suitable for copying the bible and other religious texts.

It was the monasteries that preserved calligraphic traditions during the fourth and fifth centuries, when the Roman Empire fell. 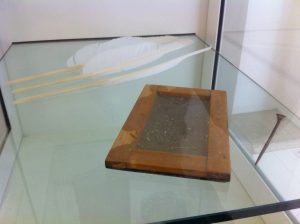 The Codex Amiatinus is one of the most impressive manuscripts of medieval times.

It was produced in the Anglo-Saxon kingdom of Northumbria as a gift for the Pope and dates to the start of the eighth century.

The original is now kept in the Laurentian Library in Florence, Italy, but a full-scale replica, created for the Millennium, is currently on show at Bede’s World in Jarrow.

This is where my link with the museum started, as an admirer of the Codex and the painstaking work, carried out over 20 years, by the monks of the twin Wearmouth-Jarrow monastery.

I’m delighted to have been given the opportunity to talk about my link with the exhibition at the Bede’s World Summer Salons.

I’m also doing some drop in calligraphy taster sessions, with a view to launching some workshops in September if they prove popular.