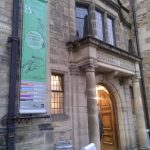 IN search of inspiration for my calligraphy class project, I headed to Palace Green Library in Durham to see Bound to Last: Book Binding from the Middle Ages to the Modern Day.

It was my first visit to the library, part of Durham University, and I doubt it will be the last. I might even take the children along after seeing the family-friendly activities on offer!

Our teacher, Susan Moor, has set us the task of creating a book in the final weeks of our course and last week she brought in some examples for us to look at.

I doubt I’ll come up with anything as impressive as the books on show at Palace Green Library, but they certainly provided food for thought. 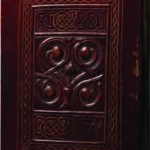 The oldest book on show is the Gospel of John, created in the early 8th century at the twin monastery of Wearmouth-Jarrow. It is the oldest European book still in its original binding of deep, red leather.

It was found at St Cuthbert’s head when his coffin was opened in 1104.

There’s also a replica Pauline Epistle and Gospel of St John. The original dates from c600, but the replica was made in the late-1930s.

There are also two Trier book covers, made for a Benedictine monastery in Trier, Germany. Such treasured, or jewelled, bindings were a featured of sacred texts in the medieval period, as many were designed to sit on the high alter.

Few now survive as part of a binding as they have been broken up over the years.

Monasteries were the first producers of books and when commercial printing houses developed outside of monasteries, binding was a separate trade. 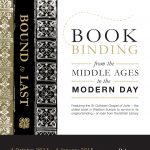 By the early 19th century, books began to be sold in trade bindings and before long, Victorian men and women could pick up a cheap novel in a functional binding at the station before a train journey.

An example of such ‘cheap’ binding – a 2009 paperback copy of Dan Brown’s The Da Vinci Code – and an e-book reader cover bring the exhibition bang up to date. And probably more to my level when it comes to creating a book cover!