Regular readers of my blog and those who follow me on social media will know how proud I am to be one of the artists associated with The Cultural Spring.

In fact, pretty much anyone who knows me will be aware of how instrumental the project has been in shaping the workshop side of my business.

The Cultural Spring helped me establish my weekly classes in South Tyneside, with groups from Phase 1 and Phase 2 of the project still going strong.

As the project enters Phase 3, having received further funding from Arts Council England (ACE), it’s clear that people who engage with such activities are seeing the benefits.

According to research, 99 per cent of those who took part in the second phase of The Cultural Spring would recommend the arts project to others. 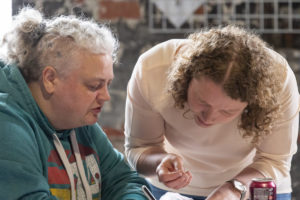 Ninety-six per cent said their confidence had increased and 85 per cent had learned new skills.

The research was carried out by external evaluators CoLibra and covered the period 2017 to 2020.

During this time, the project engaged with almost 19,000 people, held 180 creative workshops – including my calligraphy classes – and 37 Go and See trips, which introduced people to new arts experiences.

A busy three years for The Cultural Spring

“We’re a small team but working together with people in our communities and project partners, we produced an exciting range of activities, events and visits.” 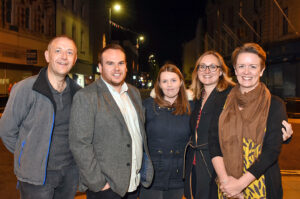 The Cultural Spring was launched in 2014, with funding of £2m from ACE to work in 10 council wards across Sunderland and South Tyneside that didn’t traditionally engage with arts and culture.

Its second phase attracted £1m of funding and moved into 10 new wards: Hendon, Millfield, Pallion, Sandhill and St Anne’s in Sunderland, and Horsley Hill, Beacon and Bents, Simonside and Rekendyke, Monkton and Bede in South Tyneside.

“We got to know our new communities very well, helped hugely by our 125 community champions and 74 volunteers,” said Emma.

“While we were delighted with the range of activities we produced and the numbers involved, what we’re particularly proud of is the outcomes reported by our participants.”

The project’s third phase began in April – albeit in slightly different circumstances due to Covid-19 – covering Ryhope, Doxford and Silksworth in Sunderland and Hebburn North, Hebburn South and Primrose in South Tyneside.

Graeme Thompson, Chair of The Cultural Spring Steering Group, said: “This extensive evaluation is further proof that communities given the chance to work with crafts people, artists and performers will always embrace the opportunity. And that is at the heart of The Cultural Spring’s ethos.

“The Cultural Spring team should be proud of this report and the impact the project has had in its communities. It’s a very small team, but has had a massive impact on both Sunderland and South Tyneside.

“Amid all the great activity was a tremendous level of support for local artists and arts organisations.

“Our team was also very successful in attracting other financial support. For every £1 invested by ACE in The Cultural Spring, that funding secured an additional £1.05 to support and enhance further arts and culture work across Sunderland and South Tyneside.

“The report also talks about our legacy, and as in Phase One, we launched new arts groups and organisations that are now self-sustaining.

“By any measure, our second phase was successful and we look forward to Phase 3.”

The Cultural Spring’s four core partners are the University of Sunderland, The Customs House in South Shields, Sunderland’s Music, Arts and Culture (MAC) Trust and Sangini, a women’s health organisation.