I believe in fate stepping in to lend a hand every now and again.

I changed supermarket jobs as a student and ended up meeting my husband.

As I sought out a career in journalism, he was the one who encouraged me to apply for work experience with the newspaper that went on to employ me for 13 years.

I certainly don’t think I’d be sitting here, writing this, if it wasn’t for my own ‘Sliding Doors’ moment. 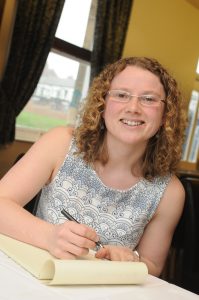 In my last week at work, I received a press release about a self-employment event being held in Sunderland by the National Careers Service.

Career advice, for me, barely stretched beyond the age of 14, so I decided to go along, at least to find out how I would go about freelancing as a journalist.

However, pushing its way from the back of my mind was also a thought about a change of career and doing something with my calligraphy skills.

Having being taught ‘the art of beautiful writing’ at school, I had put my talents to good use over the years for family and friends.

When I had a spate of weddings to cater for around five years ago, I did consider making a business out of it.

Then my children came along and the idea was put on hold – until I walked through the doors of Sunderland College.

It was there I found out about the New Enterprise Allowance scheme set up by the Government to support entrepreneurs in their first six months of trading.

The North East Business and Innovation Centre encouraged me to apply, so I did!

It meant signing on for Jobseeker’s Allowance to start with, until my business plan was approved, but with the help of my mentor, my business idea soon became a reality.

Within four months of receiving that press release, Creative Calligraphy – and a new career – was launched.