TAKING part in #LetterforPop before Christmas got me thinking about penpals.

I had quite a few when I was younger, although there’s only one that I still keep in touch with. 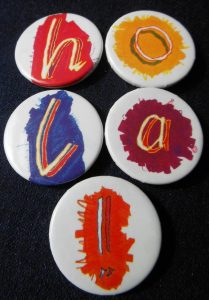 So, I headed into the loft to rescue a shoebox full of letters that I’ve kept.

It’s strange to think that some of them have been in there for 20 years!

They’re all from a penpal club I joined as a teenager called Hola!

I specifically remember a friend telling me about it on the bus on the way to school.

I’m not sure it still exists – I couldn’t find anything online apart from a press release from 1998 – but it was run by Royal Mail.

So far I’ve read the first and last letters from each person, but I’m determined to re-read them all.

I’ll keep you posted on the various 1990s references!

My first penpal was Naomi, from Australia.

I think I specifically asked for an Australian penfriend – I think it had a lot to do with the popularity of Home and Away and Neighbours at the time!

It also seemed so far away and different in the days before the internet was so widely available. 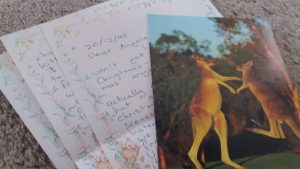 A letter and a postcard from Naomi

Naomi wrote her first letter to me in August 1995 and mentions some of her hobbies, school, Australian boys and PJ and Duncan.

She was on her way to Sydney from her home in Yass, New South Wales, to perform with her school band in a competition at the Sydney Opera House.

I bet she still remembers that day, although she wrote later that they didn’t win anything!

I started writing to my French penpals Priscillia and Christie in 1996.

I think I wanted to test out my GCSE French skills, and I definitely remember writing to them both in French. 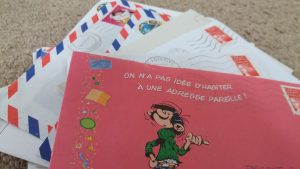 I kept in touch with Priscillia until March 1999 and Christie until October 1998.

I also tested out my secondary school language skills on Stefanie, from Germany, from 1997 to 2000.

In her last letter, she asked if I had a mobile phone!

I laughed when I re-read the first letter I received from my American penpal, Ellen, in October 1996.

“Have you ever met Queen Elizabeth’s grandson?” she asked, aged 14.

Yep, the UK is so small we bump into the Royals all the time!

I was fortunate enough to get to meet Ellen when she visited the UK and remember taking her to the National Glass Centre in Sunderland.

She and her family actually moved over from America in August 1999 and we kept in touch until April 2000.

I wonder if she’s met either Prince William or Harry yet? 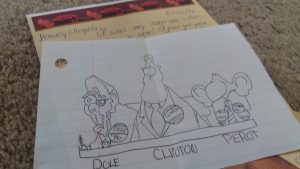 A letter and a doodle from Ellen

It’s telling that most of the relationships I had with my penpals ended around the time I was leaving school and moving on to college and then work.

The penpal I am still in touch with is Elisabeth, who lives in Austria.

I immediately loved her handwriting and her name (which probably has a lot to do with my daughter’s middle name being Elizabeth).

We bonded over a mutual love of the Backstreet Boys and our correspondence progressed from letters to e-mail to Facebook.

In the spirit of #LetterforPop though, I’m going to be sending her something in the mail very soon!