ANY class that starts with the words ‘wine glasses’ is always going to be a winner with me.

Worryingly, the wine glasses I was drawing as part of my introduction to the Gothicized Italic – or Pointed Gothic – script were rather large! 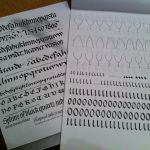 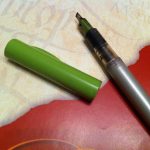 I’ve joined a calligraphy course led by Susan Moor, chairman of the Northumbrian Scribes, to refresh my calligraphy knowledge and learn some new styles.

I’m keen to get back to writing with a dip pen and also designing some more decorative pieces.

Some members of the class have been together for a while, with varying degrees of experience, but new people, like me, were made to feel very welcome.

Susan mixed group demonstrations with individual tuition, guiding us as we tried to replicate what she had shown us in our own practice pads.

The ‘wine glasses’ comment referred to the shapes within the Pointed Gothic lettering – the under arches being like wine glasses and the over arches like gothic windows.

The more experienced calligraphers assured the newcomers that everyone was starting from scratch when learning a new style and words of encouragement were passed around the table.

There was also some interesting discussion about different calligraphers, such as Sheila Waters and Dorothy Mahoney, and the varying takes on one style of calligraphy. 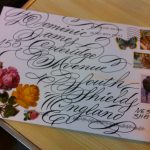 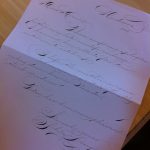 I got a little distracted at one point by a letter brought in by a fellow ‘pupil’ that had been addressed in the most beautiful calligraphy.

Its juxtaposition with the Jimi Hendrix stamp in the top right hand corner did not go unnoticed!

I was the last one to pack up and I’m already looking forward to the next session.