Calligraphy commissions come in all shapes and sizes.

Being an ex-journalist, I love hearing the story behind each one and becoming a part of that story.

But every now and again, something really special comes along.

I had the honour of helping to restore a Victorian family bible to its former glory recently.

It was a nerve-wracking but rewarding experience! 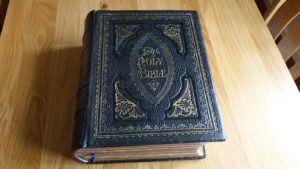 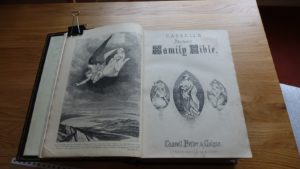 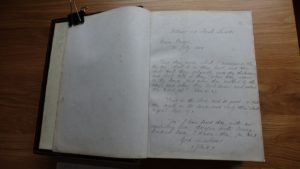 Dating back to 1880, it is fair to say the bible was in desperate need of some TLC.

Its new custodian, Stephen Leavett, was keen to have the pages recording various family milestones replaced and the whole thing rebound.

(When I saw it, the spine was being held together by gaffer tape.)

I was called upon to add the information on the new pages, which were facsimiles of the originals.

Over the years, several hands had written in the bible, so there was quite a mix of styles!

It actually pained me to see the dip pen and ink of the late 19th century give way to notes in ballpoint pen written outside the neat little boxes! 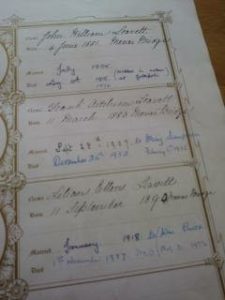 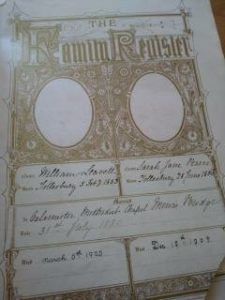 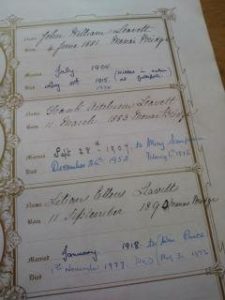 After discussing various options, Stephen and I agreed to complete the work in copperplate with walnut ink, in keeping with the original style.

I planned everything out in pencil first, which was particularly important as I had been given the exact number of pages required – no spares, so no mistakes!

Three generations of births, deaths and marriages were added to the new pages and sent with the rest of the bible to be rebound by an expert bookbinder. 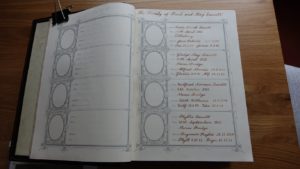 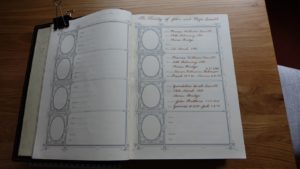 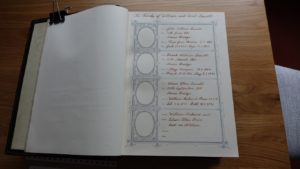 “Sadly, the pages that recorded the births, marriages and deaths of their children and their grandchildren were badly damaged.

“As a commission, Angela did a great job of recreating those pages and the Family Bible has been restored.

“Now I am taking it on a tour of my cousins, all of whom admire Angela’s wonderful work.”