Sangini is a Hindi word meaning a companion or friend.

Well I certainly made a few new friends when I met the group who took the word as its name.

Established in Sunderland in 2002, the minority-led women’s organisation promotes health and well-being through artistic, educational, cultural and recreational activities.

It often works with artists from diverse backgrounds to create a variety of approaches to engaging with marginalised groups. 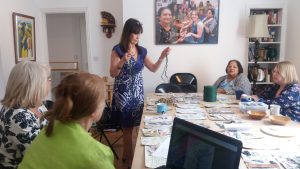 Artist Lyn Killeen (standing) with women who have worked on The Somme Remembered.

Most recently, a group of women have been working with artists Lyn Killeen and Miki Z on an art project inspired by the First World War.

The Somme Remembered opens at the Sunderland Museum and Winter Gardens on Friday, July 15.

I was invited to meet the group as they prepared for the unveiling of their work by Sangini member Haffezar (Fee) Khan, who found me on Facebook.

The Somme Remembered is being supported by the Cultural Spring, so as well as enticing me with tea and biscuits, Fee was also able to introduce me to some fellow Cultural Spring artists.

(I’ve been running workshops for the Cultural Spring since the start of the year.)

It is also part of Asunder, a city-wide programme by Sunderland Cultural Partnership commemorating the Battle of the Somme, developed in partnership with the Sunderland Antiquarian Society and the Sunderland Museum and Winter Gardens. 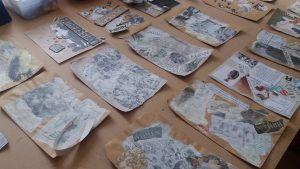 More than 30 collage-style pieces have been created with an anti-war theme, particularly focused on the home front and the role of women during the First World War.

Lyn said: “We did a lot of research and a mind map to find out which aspects meant the most to them.”

Members of Pennywell Community Centre in Sunderland were also involved.

I met the group at Makaan – another Hindi word, meaning home – which is the South Shields-based studio of Padma Rao, a former chair of Sangini.

The group has further projects lined up and Padma is keen to see the studio become a women’s arts space, saying: “Women feel comfortable here because it is like a home.”

Chatting to these women, who come from a variety of backgrounds (Padma is from India, Fee from Trinidad, for example), was a real inspiration.

I’m looking forward to seeing the exhibition – and perhaps even joining in future endeavours!