Not many people go back to being employed once they’ve experienced the freedom of working for themselves.

I always thought I’d find it hard to work for someone else again after striking out on my own and running my own business for three years.

But that’s what I’ve done (sort of) and I’m really enjoying it!

The more eagle-eyed amongst you will have noticed me mention in a previous blog post that I had taken on a new part-time job. 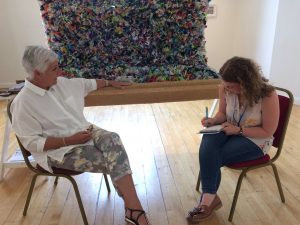 Back in reporter mode, interviewing artist Jackie Sewell in the gallery at The Customs House.

Now that I’m settled in, I can reveal that it’s a press and PR role at The Customs House in South Shields, which makes the writer in me very happy.

But although it’s freelance and I’m still self-employed, all of a sudden I have a boss again!

Fortunately, my immediate boss happens to be someone I’ve known and worked with since the age of 18, which is how I got dragged into being ’employed’ again.

When the opportunity arose, I was the first person she called – and you can’t turn a good friend down can you?

There were other temptations too – a more regular income, putting my journalism skills to good use, working as part of a team, representing an arts organisation that I already know and love and the offer of flexible working around my other commitments.

This means that Creative Calligraphy won’t suffer in any way, although I may have to give up sleep for the next few weeks!

I’ve got three workshops coming up, as well as several commissions and some volunteering/parent commitments at school with it being the end of term.

So I’m pretty much working full-time until the summer holidays kick in!

Things I love so far 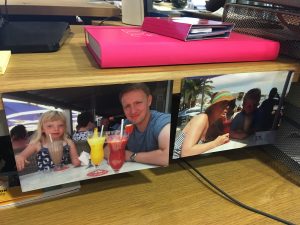 Making myself at home with family photographs and new stationery on my desk.

The office: I have my own desk and computer. Always a bonus when you’re a freelancer! I’ve stuck my photos up and moved my stationery in. I’m not planning on going anywhere any time soon.

The people: I knew most of the people I share an office with beforehand, so I felt right at home straight away. They’re a really creative bunch too and speak so passionately about what they do. My job is to make sure everyone else gets to hear that passion.

The building: The Customs House was built in the 1860s and sits right on the River Tyne, next to a landscaped park with fountains and an amphitheatre, just a short walk from the Shields Ferry landing. The location is just beautiful.

Learning new things: I’d never heard the term National Portfolio Organisation until I was tasked with writing a press release about The Customs House maintaining its status as one and as a result, securing funding from Arts Council England for another four years.

The challenge: Although I was a journalist for 13 years, this is my first venture into press and PR and being on the other side of the fence will take some getting used to! But the principles are the same, such as building up contacts and finding a good story angle. I’m also looking forward to adapting some of the skills I have built up in running my own business.

Time: There are never enough hours in the day, but I’m sure I’ll get into a routine and not make a habit of spreading myself too thinly.

Childcare: Although the hours are flexible, which is great during term time, I’ll be relying on the grandparents to look after James and Sophie during the school holidays. Not that they mind, it just brings on a serious case of working mam guilt!