I have had so much fun taking part in the holiday swap for Pencils of Promise.

They teamed up to form Letter for Good and #LetterforPop was its first campaign.

You can read more about the background in my previous blog here. 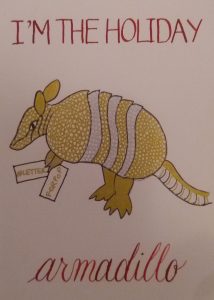 I was matched with Lisa Lewis – also known as Just Ducky Lettering – in Boise, Idaho, USA.

I was given some clues as to her likes, such as running, knitting and crochet and the outdoors.

But it was her Instagram feed – full of awesome writing in Crayola pens and coloured pencils – that provided the inspiration I needed for the lettering aspect of her package.

There were a lot of quotes from the TV series Friends, which brought to mind the episode “The One with the Holiday Armadillo”.

Well, who wouldn’t want an armadillo on the front of a Christmas card?

I also wrote a quote from Ross that features in the episode inside the card. (And tried not to think too much about the fact it first aired in December 2000!)

I also used the iconic Friends lettering on the envelope in reference to the #calligrafriends hashtag we have been using on Instagram for the project. 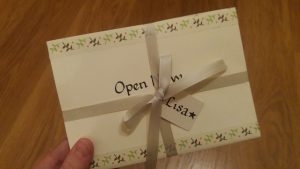 I wanted to send a little bit of north east England to the American north west, so I chose some local goodies I knew she would love.

The first was a hand-made oblique holder from Driftwood Pens in South Shields (read more about the lovely owner and craftsman Fred Baines here).

The second was a bar of Rosemary and Lemon Salt chocolate from North Chocolates – perfect for lovers of the outdoors, according to the tasting notes.

I kept the outdoor theme going with a pack of cute woodland animal notebooks and finally, added a ceramic candle plaque from Lightsource Art, stamped with ‘artist at work’. 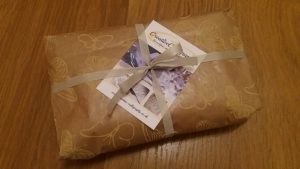 Both the chocolate and the plaque were bought from The Gallery at Papercuts in Whitley Bay, which I have since discovered is closing at Christmas.

I also added a letter and a traditional South Shields postcard and wrapped it up in packaging I’d saved from a purchase from Floral Quarter Florist after working together on a recent wedding shoot.

I was over the moon when Lisa posted a picture of her package on Instagram with an extremely joyful response to its contents.

I then received a beautiful thank you card and note in the post from her.

Now I have to send a thank you for the thank you and keep the #calligrafriendship going!