Seven Stories has re-opened to the public after a three-month makeover – and we were one of the first families to see the end result! 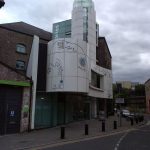 After entering a competition in which I basically hinted on for a job, we were lucky enough to receive a golden ticket to see the three new exhibitions a day before anyone else.

I was just as excited as the kids, having been teased with pictures on the centre’s social media feed in the days leading up to our visit, including one of the calligraphy-inspired reception desk. 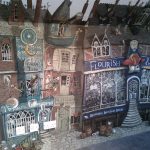 Seven Stories, the National Centre for Children’s Books, is one of my favourite places to visit in the north east and has been since it opened in 2005.

I’ve been taking James and Sophie since they were babies and my nephews provided a convenient excuse for a visit before that. 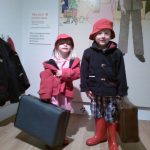 The new A Bear Called Paddington exhibition was the major draw for us this time, although Sophie loved Rhyme Around the World, which has been specifically designed for younger visitors.

Painting With Rainbows also introduced me to the work of Michael Foreman and I was particularly taken by the story of the ‘ditty box’ carried by soldiers during the First World War. 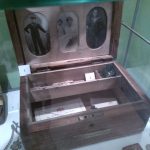 They were used to carry personal possessions, such as letter writing equipment and photographs of loved ones, and were the only safe place to keep valuable items.

While the kids were happy doing things like staring at the stars in the wigwam and dressing up, I was more interested in the letters, draft manuscripts and early illustrations adorning the walls – my favourite part of Seven Stories!

I love to see the story behind a book’s development – an agent’s letter to Michael Bond, for example, pointing out that bears do not reside in Africa, hence the change to Peru.

I’m already looking forward to our next trip – to see author Jonny Duddle and set sail on a pirate adventure!