I’ve had a great time this summer introducing people to the ancient art of calligraphy. 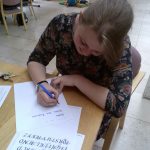 I’ve been holding taster sessions at Bede’s World in Jarrow, where I was also given a chance to talk a little about myself and my business at one of their summer salons.

For those of you who don’t know, a salon is “a gathering of people under the roof of an inspiring host, either to please or to educate”. Or so it said on the poster! 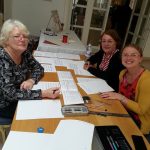 I’m not sure how close my talk came to meeting that description, but two members of the audience did come along to one of my drop-in workshops.

It’s quite hard to show people how to do something you’ve been doing for almost 20 years, so it really made me appreciate the skills I’ve built up over the years. It’s not something you can learn in a few minutes.

I do, however, hope I’ve inspired some people to take up an italic pen and give calligraphy a go. The beauty of handwriting is becoming lost in this age of digital technology, which I think gives calligraphy all the more ‘wow’ factor. 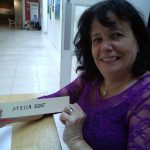 Bede’s World was the perfect setting and a chance meeting in the reception with artist Mark Gibson, who is based in the adjoining Hive Studios, has led to me (hopefully) lending my skills to an exciting art project he’s got on the go.

It seems that fate is interfering in my business plans again!