I’ve been running calligraphy workshops for over two years now and I love introducing – and re-introducing – people to ‘the art of beautiful writing’. 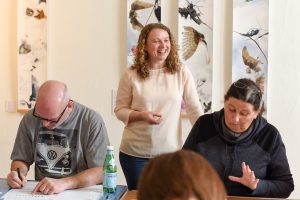 What I love most about it though, is finding out what tempted people to sign up for a class.

Over the years I’ve heard some weird and wonderful excuses for spending a few hours at a desk with a pen and paper, including a woman who wanted something else to do with her hands as she’d quit smoking!

I’ve had total newbies and people rediscovering an old hobby, stationery lovers and handwriting enthusiasts, crafters and artists looking to expand their skills and people just coming along for fun.

The rising popularity of calligraphy

Calligraphy is becoming increasingly popular, with crafts in general coming back in a big way.

The last time calligraphy saw a resurgence was during the Arts and Crafts Movement of the early 19th century, which was an antidote to the industrial revolution.

I think people now are pushing back against the digital age.

So, here are a few reasons why you should put down your phone and pick up a pen. 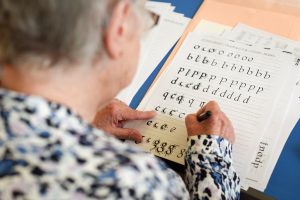 Calligraphy is an art form, but it’s easily accessible.

You can already write – you just need to adapt those skills to create letters in a different way.

With many calligraphy styles to choose from, you can play around and experiment as much as you like, so if one script isn’t for you, you can try another.

A lot of people who come along to my classes are retired, so they have time to pursue new interests, or pick up old ones that have fallen by the wayside.

One of the most unusual reasons I’ve had for someone taking up calligraphy was a woman looking for something to busy her hands with as she’d recently given up smoking!

Workshops and classes are a great way to meet new people and form friendships, particularly when they are regular, ongoing groups.

The members of one of my weekly classes have been together for over two years now and I love the rapport they have built. Likewise, with my current Cultural Spring class.

I’m actually thinking about setting up a Facebook group via my page to keep these connections going – what do you think?

There’s always that moment in a session when the room falls silent.

I used to think I had to fill that silence with chatter, but I don’t. It’s just the sound of people being completely focused on the task in front of them.

Calligraphy has a gentle rhythm and I’ve had many people comment on how relaxing it is. 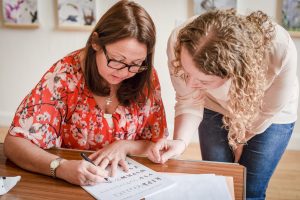 Sometimes it’s nice to do something that’s just for you – and that’s certainly something I get from the women, particularly mums, who come along to my sessions!

I’ve also had people in caring roles for whom coming along to a class is their only respite.

Life in general is busy these days, so taking a bit of time out to indulge in something that makes you slow down is always a good thing.

I’m a one-woman band and I’ve been running Creative Calligraphy for four years, with workshops becoming an important source of income.

Booking a workshop place or coming along to a class helps keep my business going and supports the venues they are held in, which are often also small businesses.

My calligraphy supplies also come from small businesses (you can see some recommended ones here), so the knock-on effect is huge.